9 amazing things we learned from the writers of Avengers: Endgame 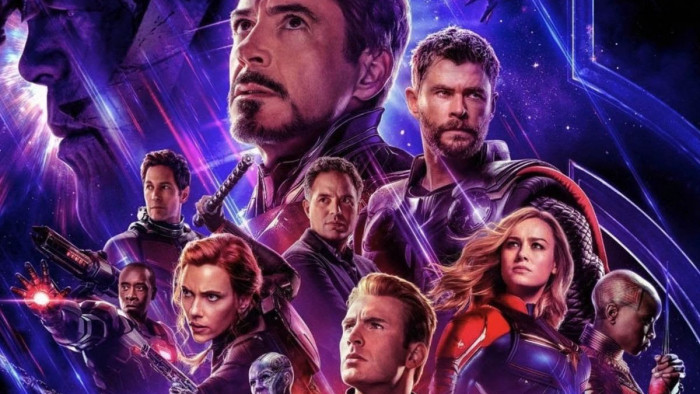 After 22 movies, perhaps the most ambitious franchise in the history of film was concluded this year with Avengers: Endgame.

And what an ending it was. One that managed to tie up the Marvel Cinematic Universe’s myriad loose ends, satisfy both the comic-book elite and mainstream audiences, and offer enough closure to ‘feel’ like an ending - while keeping things open enough to make sure the MCU lives to fight another day.

It was an astronomical task, made effortless by the magician’s behind the curtain - writers Christopher Markus and Stephen McFeely. MCU veterans, they wrote five of the 22 MCU movies. Most importantly, they were in charge of Captain America’s arc, from The First Avenger through to Endgame, only diverting off course slightly to write Thor: The Dark World.

Here are 9 amazing things we learned speaking to Markus and McFeely, when we caught up with them between BAFTA screenings of Avengers: Endgame.

1. They thought Captain America would be it

“We were writing a movie that takes place 70 years before the others. I mean, when [making Captain America: The First Avenger] there were only a few other movies in the MCU, but it seemed like if anything was going to be a self-contained thing, and might not carry on, it would be that one,” explains Christopher Markus to ShortList.

“So now, to be 11 years into our relationship with Marvel and to have told this many stories - but also to have told only one story - to have gotten to take Steve Rogers that far, is pretty mind-boggling.”

2. The tone shifts between movies were important

When telling Steve Rogers' story, it shifts both in tone and form throughout the MCU and it was this that attracted Markus and McFeely.
“What Joe and Anthony [Russo] wanted to do when they came on board, was to say that this isn’t going to be your grandfathers’ Captain America. That’s what Winter Soldier was, it was a way to tell the ‘man out of time’ story,” notes Stephen McFeely.
“If you know the comics, that’s Captain America’s bid deal: the man in the wrong time. But we spent an entire movie with a different character, in his own time, we told a different story there. So, Winter Soldier was a chance to do a ‘what does it mean to be a guy out of his time?’ story.”

3. Their scripts don't have superheroes in them

From Winter Soldier they then set up the machinations that lead to Endgame, with Captain America: Civil War, attracting more Marvel heroes along the way - the scope was beyond any other superhero movie (or even any other movie). So how did the pair make sure that they kept the story interesting? The secret was to shift the focus from the persona to the person.
“If you ever look at one of our scripts, I’m not positive it says Iron Man or Captain America anywhere, the slug is always Steve and Tony,” says McFeely.
“We’re much more interested in the guy who was frozen in ice who came back 75 years later, and the problems he has, than the dynamics of shield throwing. I like it, but I want to know who he misses and what he thinks of our world.”

4. They write bad stuff to get to the good stuff

When it comes to the writing process, there is a great deal of refining to get to what is seen on the big screen, as Markus reveals.

"It has several stages. The first is that we outline for a very long time. That is a messy locked-room process, where we are trying to get the bones of the story. Then we flesh it out into a very detailed outline, because of the next step - that is where we split the scenes up. I do one through five, Steve six to 10 and we write then separately.
"There is a lot of tedious creation of bad material that absolutely needs to happen in the creation of a thing. To debate the creation of what you know is bad, is pointless - just get a bad one out! We need the whole, ‘I know it’s stupid, just let me write it’. Because you need to see something there so you can start to fiddle with it.
"From the second script we ever wrote, until now it has been this way. We will write separate scenes, alone, put them together, not edit them, create a big overlong, not great first draft and attack that together. That’s when we are in the room together, reading it aloud."

5. They no longer know who has written what

This back-and-fourth process means that the finished script has been written by both, but it would be hard to pick apart what is Markus and what is McFeely - even the writers can no longer tell.

"We learned screenwriting together, so in some ways when I watch movies that we have written it is very rare that I can tell the line I wrote, it is just this hive," says McFeely. "I don’t know where the credit goes anymore. We have developed that skill over the last 20-something years.
"Writing is rewriting, you just need to get to the rewriting as fast as you can."

6. Not everything in their scripts is for you

Even the biggest MCU nut will have times when they watch a Marvel movie and some scenes don't quite hit. But there's an obvious reason for this - sometimes, it just wasn't written for you. Whether this is bringing a movie back to its kid-friendly comic-book roots or focusing on characters that offer little interest - it's about building a more rounded view of superheroes. In short: it's not all about you.

"There are different parts of these movies for everybody," explained McFeely. "For example, the women of Marvel at the end of Endgame. I know plenty of guys that think it’s a little convenient that a lot of the women are on the same spot, but you weren’t an eight-year-old girl feeling that, you were jazzed. You can buy t-shirts now that say ‘she’s got help’ and that gives me goosebumps."
McFeely continues: "And in The Winter Soldier. There we are doing a grounded Three Days Of The Condor '70s-style movie, and there are nice big juicy themes about government surveillance, drones and things. But in the middle of that movie, when you figure out what is really going on, there is a talking computer from 1972. You are reminded that it’s a comic-book movie - that doesn’t scare us, it’s in the DNA of the project."

A screenwriter's job no longer finishes in pre-production - not if you are part of the MCU, anyway. For Markus and McFeely that meant moving to London for Captain America: The First Avenger and to Atlanta for The Avengers movies (they are usually based in LA). They did this, as they were needed on set - whether to re-jig lines on the day, or to prepare for the next day's shoot.

"That process is a groove on big-budget filmmaking. It’s not unlike a TV show as you are kind of like shooting the same thing all day, a page a day," says McFeely. "That means in the morning when they are setting it up and blocking it, that is when Chris and I are most helpful. That’s when rewrites come up, as the set may be different to what we thought or Robert Downy Jr has an idea. After the first couple of hours, when Chris and I make adjustments or alts, we are kind of done for the rest of the day."

"Done on what’s being shot that day," notes Markus. "Then frequently we’ll have next week’s scenes, tomorrow’s scenes… everything can be tuned up a bit - certain things can be fixed in stone, or at the very least putty. They’ve been shot so you can fit them better."

A byproduct of being on the set also means that the writers get to see the actors perform their lines - and this is something for the two writers that never grows old.

"I haven’t lost any of that," says Markus. "Sometimes on Day 80 when you have to get your butt to the set at 7am, you may be a little, you know, but in general I still walk on sets and I just pinch myself. Part of it is that I understand the hard work and craftsmanship that goes into all departments - holy crap, somebody built that and it looks real - but another part is that famous people are going to say things I wrote, that’s awesome! When I lose that I will retire."

9. Saying goodbye is a hard punch

Avengers: Endgame is officially the biggest movie of all time, which is not a bad thing to have on your CV but for Markus and McFeely while the box office is great, there was something more satisfying about penning the ending to the MCU as we know it.

“It’s been incredible,” says Markus. “On a numbers basis, it has been staggering but the emotional response has been so gratifying. People are grateful, which is a weird thing. A lot of people are entertained by movies, they have a good Friday night and it fades.
"But people seem genuinely struck by this movie and it stays with them, and they go again to see it, to feel it again. That’s very special.”
“It’s the 22nd movie of a franchise that a whole generation has grown up with,” adds McFeely, “So when you say goodbye to a few of these characters, that’s a hard punch.”
Avengers: Endgame is out now on DVD and Blu-ray, courtesy of Disney.