Amazon brings its kid-friendly Dot to the UK - and we’ve had a play. 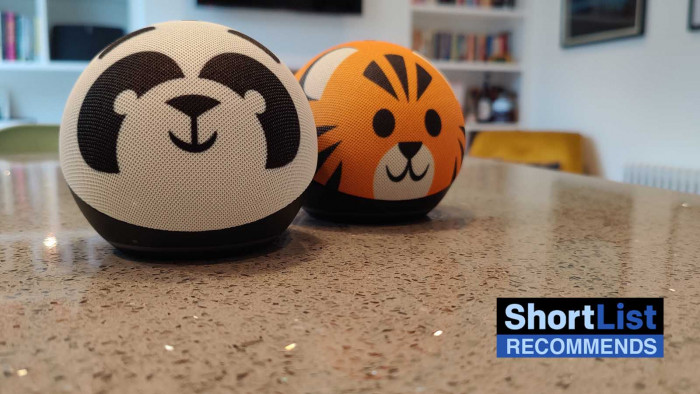 The world our children are growing up in today is a far cry, technology wise, from what many of us experienced. While this is full of wonderful opportunities, from education to entertainment, it’s also something we need to be wary of.

They are living in a time where a phone, a tablet, a device that’s online means that they are always contactable, for better or worse, and everything is a web search away.

It’s always welcomed, then, when a gadget comes along that has been designed specifically for kids. One that takes both their needs into consideration and makes sure the adults in the room (or not in the room) know exactly what is going on at any given time.

This is a device that’s already out in the US and is making its debut on UK shores in July. It’s a safe space for children to interact with Alexa. Parental controls are there, purchasing (for obvious reasons) is off, time limits can be imposed and its crammed with age-appropriate content.

Amazon has been busy behind the scenes, making sure Alexa will interact with children in the right way. We spoke to Glenn Millard, Head of Amazon Kids+ UK, about how Amazon was approaching Echo Dot Kids and he explained that while Alexa already had children's content, everything has been looked at from a kids’ point of view. “We taught Alexa to recognise things like ‘Awexa’ [a common speech error for children] and set out deliberately to make those changes. We also had Alexa understand stopping and starting after a long pause which is needed for kids. It had to be taught these things.”

ShortList was one of a select few to get to try the gadget out, before its official launch.

Armed with our own, very curious, four (and a half) year-old, we put the Amazon Echo Dot Kids through its paces - here are five things to know…

The new Amazon Echo Dot Kids comes in two design options: a tiger and a panda. The spherical shape of the Echo Dot is already a lot more aesthetically pleasing than the previous Dot and makes for a great canvas for these child-friendly prints. And that’s what’s changed here: it’s the fabric around the Echo Dot that has been painted to look like each animal. There are no added rubber bumpers - which is what Amazon has opted for in the past with its kids-orientated tablets - but the Echo is a device that isn’t designed to be touched a whole lot but spoken to. For those worried about breakages, there is a two-year guarantee on the devices that means any breakages result in a new device, no questions asked.

2. Setup is simple, then it’s over to your child

The key thing here is that this Echo Dot Kids is now ‘gated’ - the addition of Amazon Kids+ means that it is a child-friendly experience and Amazon has thought of a lot of things to make sure that it is suitable for children and, more importantly, reassuring for adults.

This includes time limits that can be imposed on how long your child uses the Echo Dot for - we programmed a two-hour slot after school and before bed, where our child could use the device - and the ever-watching Parent Dashboard. This is where you can view everything your child has done so far on the device. This should offer peace of mind, given you can see the interactions that take place. It could also be seen as a conversation starter, if there are certain audiobooks and games that your child is going back to again and again.

3. Alexa interacts well with kids and is always learning

And this is where we hand over the review to our four (and a half) year-old. There was some hand-holding involved throughout but they have grown-up with voice control, unlimited on-demand children’s TV and can pinch and zoom on a tablet better than their parents.

In short: they know how to get Alexa to annoy the hell out of their parents by saying, “Alexa, I love you” and getting the Echo to sing that rather annoying tune (if you haven’t yet tried this, apologies for bringing this little Easter egg into your life).

The first thing they said to the Echo Kids Dot was, “Alexa, I’m bored.” Which annoyed me, given the amount of toys strewn across their room but luckily it is one of the many ‘wake’ phrases that Alexa uses to interact with children.

In reply, Alexa asks if they wanted to play a game, listen to music or have a story. There’s a simplicity here to what’s asked and it really does work to get a child interested.

A game is chosen and a kids quiz is launched. The questions are graded by difficulty and we choose the lowest. It’s about birds and they get all the questions right. Well, except the last one where they take too long to answer and the quiz seemingly stalls. A quick ‘reset’ - asking Alexa to play the kids quiz again - and we are back where we were, earning 'stars' for each question that’s right.

Next up is music. This is where it gets a little bit tricky. Amazon has automatically added the removal of explicit lyrics which is a good thing but we found the pre-programmed playlists quite similar. You can ask for certain songs, though, so Moana’s You’re Welcome is played for the 15 millionth time.

This is key to the new Amazon Echo Dot Kids - if your child is familiar with the Dot then some things will not seem that different but it’s good to know that everything is done within a safe confines.

Another question is asked: “Alexa, how many planets are there?” Alexa answers, with a nice little message about Pluto being a dwarf planet but still awesome.

While Alexa has certainly learned to cope with a four year old’s voice, some more patience is needed with things like jokes. When asked to tell a joke, often the punchline would be drowned out with our child asking: “I don’t know, what do you get if you cross…” It seems that Alexa sometimes is a little impatient with the punchline.

The list of kid-friendly things to do with Amazon Kids+ is impressive and you’ll be hard pressed to get through it all. In all, Amazon has packed in over 170 Audible kids’ books - including titles by CS Lewis, Michael Morpurgo and David Walliams - and 10 ad-free radio stations and some premium skills from the likes of Disney, Harry Potter and the Gruffalo. The most used in this household were the Numberblocks and Alphablocks skills, while the Disney selection of short stories is lovely and immersive. Oh, and it’s great to finally see that using the word ‘please’ offers up some positive reinforcement. This is something that should come to the adult version of Alexa

If you are familiar with Echo, then there are some features you’ll be pleased to hear work through the Echo Dot Kids, including the ability to ‘drop into’ the Dot and speak to your child from another room. And the wake-up feature is fun, too, where your child can choose a cartoon character to wake up to in the morning.

5 It’s not just about the Echo

This is where it gets a little confusing. Even though the Amazon Echo Dot Kids is launching, you don’t need a Kids’ Echo to use Amazon Kids+. If you are already subscribed, thanks to purchasing a Fire Kids Tablets, Fire Kids Pro, Fire TV and the like, then you can use Amazon Kids+ on Alexa at no extra cost. If you are new to Amazon Kids+ and you sign up through Alexa, then you will automatically be able to use the service on any Amazon kids device.

Amazon Kids and Amazon Kids+ on Alexa will be available to enable via the Alexa app, to new and existing Echo, Echo Dot, and Echo Plus devices, through an over-the-air software update from July 21st.

It’s up to you whether you want your child to interact with Alexa. That part is your decision and yours alone. What Amazon has done here is cater for those who want their children to embrace voice tech. It has created a safe space for kids to learn and for parents to be a part of or observe on the sidelines, allowing complete transparency at the tap of a button and myriad controls that can be adjusted and turned on and off.

While there are niggles - Alexa still has some things to learn when it comes to interacting with children that are quick to change their mind and get bored easily - but the building blocks are there in the Amazon Kids+ service.

Discovery is key to making Kids+ on Alexa work. There will be a bit of hand holding at the start, to help your child figure out just what they can do with Alexa. We found jumping into the app version of the service and picking out things that could be done and telling our child to say these things really helped. But once they have these cues, it’s great to see the interaction change and the fun begin.