Celebrating 50 years of one of the greatest gangster film. 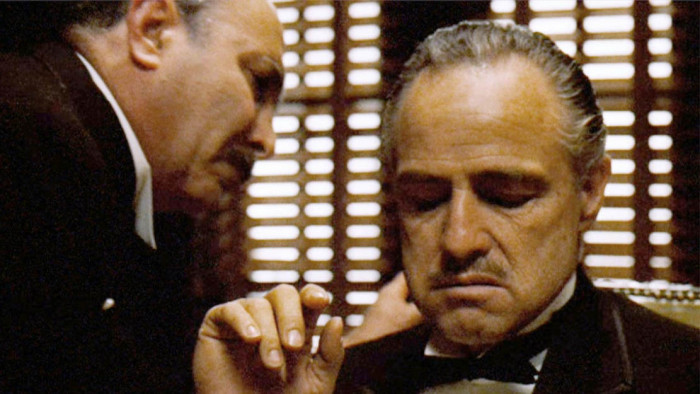 It's been 50 years since The Godfather debuted in cinemas. It was widely released in US cinemas 24 March 1972, hitting the UK in August of the same year.

It is one of the greatest movies of all time, made by a director who was a mere 33 at the time.

To celebrate, we have put together 25 facts of The Godfather - things we reckon you (probably) don't know about.

1. In the film’s opening scene, Vito is famously seen holding a cat. Amazingly this was a stray - there was no cat in the original script. Francis Ford Coppola found it while walking through the lot at Paramount Studios and wrote it into the movie. Its ludicrously loud purring muffled some of Brando’s lines, which meant they had to be looped over.

2. Spare a thought for actor John Marley who, during rehearsals, would "wake up" to find a fake horses head in bed with him. When the cameras rolled, without him knowing, a real horses head from a dog-food factory was used. His screams were real. Animal rights groups unsuccessfully protested the inclusion of the scene.

3. Things on screen may have been intense but off screen the actors were embroiled in, shall we say, high jinx. Marlon Brando, James Caan, and Robert Duvall spent the filming process trying to out-moon one-another. Bare buttocks were exposed during the childish game of oneupmanship until Brando showed his backside in the middle of a huge wedding-reception scene. The others conceded defeat and he was presented with a belt buckle with the words “Mighty Moon King” emblazoned

4. George Lucas put together the “Mattress Sequence” (this montage of crime scene snaps and headlines) as a thank you to Francis Ford Coppola for helping him fund American Graffiti. Lucas used photos from real crime scenes. The one pictured is Frank “The Enforcer” Nitti, Al Capone’s right-hand man who had not been murdered, but actually shot himself. During the scene Francis Ford Coppola's father Carmine Coppola is the piano player.

5. Al Pacino made just $35,000 for starring in the film (the same as James Caan and Diane Keaton and $1,000 less than Robert Duvall). However, having made runaway hits Scarecrow and Serpico after The Godfather, Pacino managed to command a $600,000 salary for The Godfather: Part II, as well as a 10 percent cut of the movie’s adjusted-gross income.

6. There are a host of 'almost cast' stories but perhaps the biggest is that Orson Welles lobbied to get the part of Don Vito Corleone, offering to lose a good deal of weight in order to get the role. Francis Ford Coppola, a huge Welles fan, had to turn him down because his mind was set on Brando.

7. Associate Producer Gary Fredrickson once said that Lenny Montana (Luca Brasi - pictured) told him he had worked as a Mafia bodyguard and arsonist.

10. Coppola’s hiring of Brando was met with fierce opposition by playboy Paramount executive Robert Evans: “He’s crazy. F*ck him and the horse he rode in on,” was what Evans apparently said at the time.

11. This scene where Sonny beats up Carlo, took four days to shoot and featured 700 extras, the vast majority never getting a glimpse of screen time. The use of the garbage can lid was improvised while the yellow truck in the background and a wooden box on the sidewalk (pictured) are strategically placed to hide objects or buildings that didn't exist when the movie was set. The cars' wooden bumpers are an example of incredible attention to detail, because auto manufacturers of the time were using alternate materials to conserve metal for the war effort.

12. Marlon Brando wanted to make Don Corleone look "like a bulldog," so he stuffed his cheeks with cotton wool for the audition. For actual filming, he wore a mouthpiece made by a dentist; this appliance is on display in the American Museum of the Moving Image in Queens, New York. See it here. Brando spent three hours in make-up every day being fitted with the steel-bar dentures that sat below and in front of his lower teeth, with blobs of resin (known as ‘plumpers’) at either end to give him that imperious jawline.

13. James Caan also wore dental prosthetics for his role as Sonny Corleone. His ‘fangs’ were built up using quick-setting acrylic to make him look more animalistic.

14. “Mario Puzo had invented the term ‘The Godfather’ for the novel. It didn’t exist,” said author of The Godfather Effect Tom Santopietro. That's not all that was invented by Puzo. According to Francis Ford Coppola, the term "Don Corleone" is wrong. In Italian, addressing someone as "Don" is the same as addressing them as "Uncle" in English. Correct usage would be "Don Michael" or "Don Vito". Coppola says that Mario Puzo, who couldn't speak Italian, made up the idea of using "Don" with a person's last name and it stuck, totally transcending The Godfather.

15. The shooting of Moe Greene square through the eyeball was inspired by the real life death of gangster Bugsy Siegel. Special effects masters rigged actor Alex Rocco's glasses with two tubes hidden in the frames. One had fake blood in it, and the other had a BB and compressed air. When he was "shot", the compressed air fired the BB through the glasses, shattering them from the inside. The other tube then released the fake blood. Genius.

16. The most complicated scene for special effects was the death of Sonny Corleone at the Jones Beach Causeway toll plaza. James Caan's suit was rigged with 127 pouches of fake blood that exploded.

17. McCluskey's shooting was done by building a fake forehead on top of actor Sterling Hayden. A gap was cut in the middle, filled with fake blood, and was bunged up with prosthetic flesh. The plug was yanked out with fishing line, making a hole suddenly appear.

18. It's well known that Robert De Niro auditioned for a number of roles in The Godfather, alongside fellow "failures" Warren Beatty, Jack Nicholson and Dustin Hoffman.

19. Opposition to the movie was spearheaded by the Italian-American Civil Rights League who began with peaceful protest — including a rally at New York’s Madison Square Garden that raised $500,000 to halt production. Things soon became a campaign of intimidation. Little surprise being as the League was headed by a real-life mobster and former contract killer Joseph Colombo (pictured).

20. Gianni Russo, the Mob-connected fixer who played Don Corleone’s abusive son-in-law Carlo Rizzi has some insight into what levels Joe Colombo, the head of the Italian-American Civil Rights League, would go to have the film canned. He said: “[The Colombo family] had idiots around them who would do anything. Francis [Ford Coppola] went to Little Italy to do some tests before filming in a movie mobile, like an Airstream. They went in for lunch and when they came back the truck was gone. A million dollars’ worth of equipment.”

21. Thefts and veiled threats were common forms of intimidation used by groups who didn't want the movie made, but the most vicious incident came when Paramount executive Robert Evans, his Hollywood actress wife Ali McGraw and their infant son Joshua received a mystery call at their New York hotel. “We don’t want to break your pretty face, hurt your newborn,” rasped the voice. “Get the f*ck outta town. Don’t shoot no movie about the family here. Got it?”

22. Frank Sinatra had been against the project since its inception and allegedly threatened to break Mario Puzo’s legs in 1970 when the pair were introduced — because of the similarity he bore to Johnny Fontane. "Sinatra was incessantly career-obsessed,” said film historian and author of The Godfather Effect, Tom Santopietro. “He knew Vito was a great role and so he saw Ford Coppola, well before filming had started, and said, ‘Francis, I will play Don Vito for you. I’ll never do it for those guys at Paramount so let’s you and I buy back the rights and make the movie.’” Coppola, for whatever reason, rebuffed the offer and this, according to Santopietro, deepened Sinatra’s hatred of the movie.

23. Legend has it Frank Sinatra successfully got Italian-American singer Vic Damone (pictured) to quit his role as Johnny Fontane and Giani Russo (Carlo Rizzi) claims he tried the same trick with him. “Sinatra’s a punk,” said Russo. “He called me up and said, ‘I don’t want you to support this thing.’ So I hung up the phone.”

24. Producer Al Ruddy invited Italian-American Civil Rights League head honcho and mobster Joe Colombo to his East Coast office to broker a deal for peace, during the League's bullying attempts to have the movie closed. Colombo and his crew demanded that Ruddy delete all mentions of ‘mafia’ in the script, but they didn’t bother to read it. So Paramount agreed and [the League] thought it had won a great victory, despite the fact there was only one use of ‘mafia’ in the script. It was indeed removed.

25. Members of the notorious Gambino crime family would visit the set every day and, according to mobster and actor Giani Russo (Carlo Rizzi), the wedding scene featured “100 years of good behaviour total”.