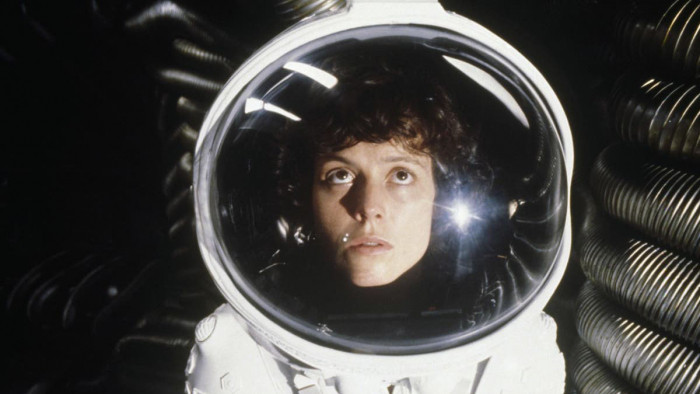 Some 40-odd years later, the movie is still a fascinating watch and richly deserves its place in our best 70s movies list.

Here we celebrate the film, by offering up 20 things you (probbly) didn't know about Alien. And even if you do know them, then you can bathe in the knowledge that you are a true film fact fan.

A whopping 130 alien eggs were made for the egg chamber inside the downed spacecraft. The inside of the eggs were composed of cattle hearts and stomachs. The tail of the facehugger was sheep intestine and the embryonic movements of the facehugger, prior to bursting out of its egg, were created by Ridley Scott himself using his rubber-gloved hands. Oh and the dead facehugger that Ash autopsies was made using fresh shellfish, four oysters and a sheep kidney. Shall we move on?

The face part of the alien's head is made from a cast of a real human skull, while the drool is KY jelly and shredded condoms were used to create tendons of the beast's jaws. Three aliens were made in total: a model alien; a suit for seven-foot Nigerian actor Bolaji Badejo; and another suit for his stunt man. Speaking of Bolaji, check out this pic of him in the suit, minus the head. Scott cast him after one of the production crew members met him in a bar.

Bolaj had to stand on the set all day because his costume wasn't built to allow him to sit. A special sling was constructed to hoist him so that he could rest his feet.

If you haven't seen this particularly eerie behind the scenes footage of Badejo practicing his alien movements with a rudimentary alien head on, then do. And kiss goodbye to sleep, forever.

The ship "Nostromo" is named after the title of a Joseph Conrad book. The shuttlecraft is called the "Narcissus", from the title of another Joseph Conrad novella: The Nigger Of Narcissus. The Conrad theme continued in Aliens where the "Sulaco" was named after a town in Nostromo. Alien director Ridley Scott is a great admirer of the author and even adapted Conrad's short story The Duel into 1977 movie The Duellists.

To scare "Jonesy" - who was played by four near-identical cats - the filmmakers hid a German Shepherd behind a screen, then suddenly removed the screen when necessary. The first day that she shot a scene involving Jones, Sigourney Weaver's skin started reacting badly. She immediately thought that she might be allergic to cats, and that it would be easier for the production to recast her instead of trying to find 4 more identical moggies. As it transpired, Weaver was reacting to glycerin sprayed on her skin to make her look sweaty.

It's partly true that the cast didn't know in advance how the scene of the alien's emergence from John Hurt would play out; Scott deliberately kept most of it a secret so that their horrified reactions would be spontaneous and real. "All it said in the script was, 'The thing emerges,'" Sigourney said later. "Everyone was wearing raincoats," she continued, presumably referring to the crew. "We should have been a little suspicious."

H.R. Giger's initial designs for the facehugger were held by US Customs who were alarmed at what they saw. Writer Dan O'Bannon had to go to LAX to explain to them that they were designs for a horror movie.

The xenomorph itself was also based on Swiss designer Giger's work, more specifically Necronom IV, Giger's 1976 surrealist print, produced three years prior to the movie. You can see it here.

To achieve the chestburster scene, which was filmed in one take with four cameras, a fake torso containing the model creature was bolted to the table. John Hurt was underneath with his head sticking up. This picture here is an interesting behind-the-scenes reveal.

Harrison Ford turned down the role of Captain Dallas while Meryl Streep was in the final two, against Weaver, for Ripley. Veronica Cartwright had read for the part of Ripley but didn't realise she was to play Lambert instead until she arrived in London for costume fittings. Sigourney was actually the last of the seven principal stars to be cast.

According to Yaphet Kotto, whop sadly passed away March 2021, Ridley Scott told him to annoy Sigourney Weaver off-camera so that there would be tension between their characters.

By the way, did you know that Kotto was Kananga in Live And Let Die and Laughlin in The Running Man?

Ridley Scott cites three films as the shaping influences on his movie: Star Wars: Episode IV - A New Hope and 2001: A Space Odyssey for their depiction of outer space, and The Texas Chain Saw Massacre for its treatment of horror.

In an early draft of the film there was a sex scene between Ripley and Dallas but it was never shot. Also, quite rightly decided against, was a scene in which the xenomorph became sexually aroused by Ripley. Scott says that in the scene, after Ripley hides in the closet, the alien would find her and would be staring at her through the glass door. The alien would then start touching itself as if comparing its body to Ripley's. Yeah, that's weird.

To preserve the shock-value of the alien's appearance, no production images of it were released.

The spacesuits were huge, bulky items lined with nylon and with no outlets for breath or condensation. As the actors were working under hot studio lights they spent most of their time passing out. A nurse had to be on hand at all times to keep supplying them with oxygen. It was only after Ridley Scott's and cinematographer Derek Vanlint's children were used in the suits for long-shots and they passed out too, that modifications were made.

Speaking of passing out, when the alien burst through Hurt's body, stagehands pumped geysers of fake blood through the cavity so hard that a jet hit Cartwright in the face. She passed out.

It was conceptual artist Ron Cobb who came up with the idea that the Alien should bleed acid. This came about when Dan O'Bannon couldn't find a reason why the Nostromo crew just wouldn't shoot the alien.

The creature is never filmed directly facing the camera due to the humanoid features of its face. Ridley Scott, determined at all costs to dispel any notion of a man in a rubber suit, filmed the beast in varying close-up angles of its ghastly profile, very rarely capturing the beast in its entirety. Which, given this shot shows it almost in its entirety, seems like a wise call. Is it wearing Han Solo trousers?

The whole laying eggs in chests idea came from real parasitic wasps that are the work of the devil. The wasps inject their embryos into caterpillars and use a virus in their DNA to paralyse their host.

For 14 days they develop until they bite their way out. Fancy witnessing that hell via YouTube? No problem!

Dan O'Bannon, the original writer, co-wrote and co-starred in John Carpenter's 1974 sci-fi comedy Dark Star. When the film bombed, O'Bannon decided it was easier to write something that would scare people than make them laugh. Thus, he set to work on a script which would one day become Alien. The original title, though he was never happy with it, was Star Beast. It was only after re-reading his script that he noted how many times the word "alien" appeared, and realised that it was perfect.

Ripley was originally scripted to be a male character, until one of the producers suggested that they could change all the rules of science fiction films by making their hero a woman.