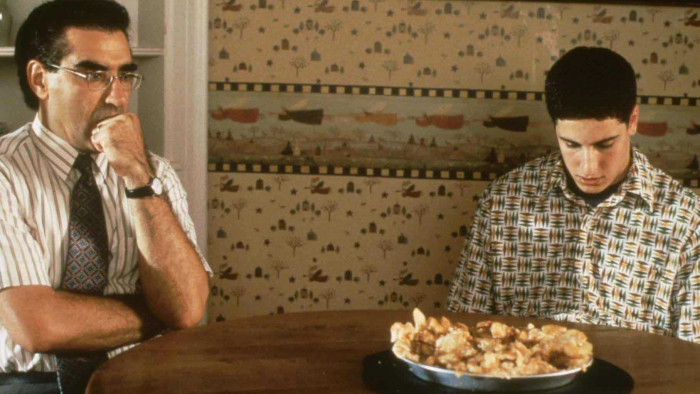 American Pie is a film very much of its time. The movie isn't so much a sex comedy but a comedy about sex, or lack of it - and it's hilarious. American Pie is also a whopping 22 years old now, which means that it's perfect time to revisit the movie and offer up some facts you may not know about the film.

“There's something about your first piece,” quipped American Pie's tagline, 22 years and seven mostly forgettable sequels later, how right it was.

Because for those of a certain age, the film continues to stand as a seminal, hormonally-charged classic, a Porky’s of the nineties, and a raucous comedy worth revisiting time after time.

With this in mind, why not pay it the ultimate respect and learn of 15 lesser known American Pie facts?

The script - written and sold by first-time screenwriter Adam Herz within six weeks - dropped onto the desks of studio bosses with the title, "Unfinished Teenage Sex Comedy Which Can Be Made for Under $10 Million That Studio Readers Will Most Likely Hate but I Think You Will Love”.

The title was changed to Great Falls during the production, and it was only when test screening audiences took a dislike to the name that American Pie was chosen instead.

Making his feature film debut, Seann William Scott earned just $8,000 for his role as Steve Stifler. He was paid $5m for reprising the role in American Reunion.

The ‘pale ale’ that Stifler drinks is actually beer with egg whites in it, almost causing Scott to throw up during takes.

For the infamous pie-humping scene, directors Paul Weitz and Chris Weitz had Jason Biggs jump up on the counter and attempt the missionary style position when inserting his manhood into the apple pie. The shot didn’t make the final cut after it was deemed unpractical.

The apple pie in question was store bought by a member of production staff at a Costco in Long Beach, California.

To replicate an erection, Jason Biggs was given an aluminium-wrapped sausage stuck on a pencil.

At 26, John Cho was the oldest actor to play a high schooler in the film.

Finch’s scooter breaking down when leaving the diner was unplanned, but the footage was kept and ran with.

In the original script, Steve Stifler’s first name is Ryan, Paul Finch's last name is French, and Oz’s middle name, not revealed in the film, is Dieter.

As well as providing songs for the film’s soundtrack, members of Blink 182 make a cameo during the internet broadcast scene between Jim and Nadia.

She might have admitted to doing questionable things with her flute at band camp as Michelle Flaherty, but actress Alison Hannigan was a proficient clarinet player when she attended North Hollywood High School.