All the great things revealed at D23. 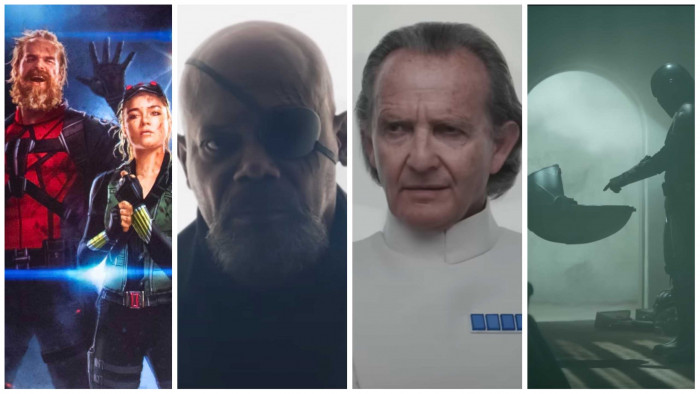 The Disney D23 expo is the ultimate showcase for fans. The weekend event always has an exclusive or two about upcoming projects and this year was no different: Disney has revealed a whole load of new tidbits.

Here we round up the best things that were revealed about Star Wars and Marvel, plus some extra cool bits about Indiana Jones and the like.

Here's what you need to know...

1. We got a brand new Mandalorian: S3 trailer

The teaser trailer for the third season of The Mandalorian was revealed at D23 and, after the events of season 2, it very much pitches Mando as the father figure to Grogu. From the looks of the trailer, the show is going far beyond the sand sets we are used too - with a lot of space dogfights and new-looking planets to explore.

The Mandalorian: S3 should be with us February 2023.

2. A new Andor trailer proves this will be a special Star Wars show

There really isn't long to wait for Andor now. The new Star Wars show is set to debut 21 September and as this latest trailer proves, this show is going to be something special.

Rogue One's Tony Gilroy is the showrunner for this one and it's based on the character Cassian Andor, played by Diego Luna, a Rebel spy who we last saw in Rogue One.

The show is set five years before the events of the movie and we are getting 12 episodes in season one, which makes it the biggest number of episodes for a live-action Star Wars show season to date. In total there will be 24 episodes (two seasons).

Secret Invasion is a TV show that has ties to Captain Marvel. It's based on Samuel L. Jackson’s Nick Fury playing detective and trying to unearth The Skrulls, aliens that can shape shift into humans. This means nobody can be trusted which makes for an enticing plot.

At D23 we were shown the first trailer for the show and it showcases a bearded Fury back to fight the impending fight. There are plenty of stars in this one, including Cobie Smulders, Kingsley Ben-Adir, Olivia Colman, Emilia Clarke and Don Cheadle.

Cheadle fans will be pleased to know that he is also back for Armor Wars - a show that will follow directly after the events of Secret Invasion. So, expect so more action from War Machine/Iron Patriot.

4. Thunderbolts is official - and sounds incredible

In Marvel lore, the Thunderbolts are a bit like The Suicide Squad. They aren't the good guys but they are brought into help with the good fight.

Now, we have confirmation which morally ambiguous characters make up the ragtag team and there are a few fan favorites on board.

Daredevil: Born Again won't be filming until 2023, but Charilie Cox Vincent D’Onofrio hit the stage to chat about reprising their roles as Daredevil and Kingpin respectively.
We found out the show will be 18 episodes long and while it's going to be a bit of a wait to see the series, Cox did tease his Daredevil debut in an upcoming episode of She Hulk: Attorney at Law.

Although Captain America: New World Order has already been announced, the cast made an appearance, including Anthony Mackie playing Sam Wilson, Carl Lumbly as Isaiah Bradley and Danny Ramirez as Joaquin Torres. Director Julius Onah was also on stage and it was revealed that Tim Blake Nelson joins the cast as Dr. Samuel Sterns - a role he played in 2008's The Incredible Hulk.

7. We now know how is officially directing Fantastic Four

It's official: Matt Shakman will be helming Fantastic Four and the movie will be out in just over two years. While we are all still waiting on confirmation as to who will be cast in the movie - you can check out our Fantastic Four casting thoughts - it's great to see the man behind WandaVision heading to the big screen.

Harrison Ford made an emotional visit to D23 to talk about the new Indiana Jones movie. He took to the stage with Phoebe Waller-Bridge. Rather brilliantly he was also reunited with Short Round actor Ke Huy Quan at the show. Before you get your hopes up that he is in the movie, Quan was there because he is starring in Loki: S2.

9. Avatar: Way Of The Water made a huge splash

The first few scenes of Avatar: Way Of The Water were shown off and the reaction seems to be that we will all be wanting to don 3D specs again, when the movie is out 16 December. It was also confirmed that Avatar 4 has gone into production - which is a little confusing as we haven't even seen the second movie yet!

10. Werewolf By Night is an unexpected Halloween treat

This looks great. Werewolf By Night is a Marvel comic that has been adapted for the small screen and is set to be available through Disney Plus from 7 October. Gael García Bernal is starring as Jack Russell / Werewolf by Night.

It's being directed by Michael Giacchino who is best known for his theatrical scores and it will be an hour-long special.