Now that many of us are working from home for the foreseeable future, finding the best Wi-Fi extender is essential. It’s a bit of kit you need to ensure that your Wi-Fi signal stretches from your router to your improvised home office.

Ideally, you’d place your router smack-bang in the middle of your home, giving it the maximum possible reach, but we know that’s not always practical. As Wi-Fi signals are affected (to varying degrees) by the type of material they need to pass through, this can mean that by the time your signal has made its way through your floor, and several walls, it’s as weak as a three-day-old kitten.

There’s nothing worse than dropping out of a video call at an essential moment, or having to walk your laptop into a different room, just because you want to download a file. Giving your Wi-Fi signal a boost means that you can experience a stronger signal in different rooms of the house, or eliminate Wi-Fi blackspots entirely.

There are lots of Wi-Fi extenders on the market. Many of them are confusingly named and it isn’t always easy to determine which one is going to best meet your particular needs.

Never fear, we’ve done the research for you. Below you’ll find our pick of the best Wi-Fi Extenders currently available to buy. We’ve considered a range of budgets and requirements, so there’s a Wi-Fi solution available for everybody. 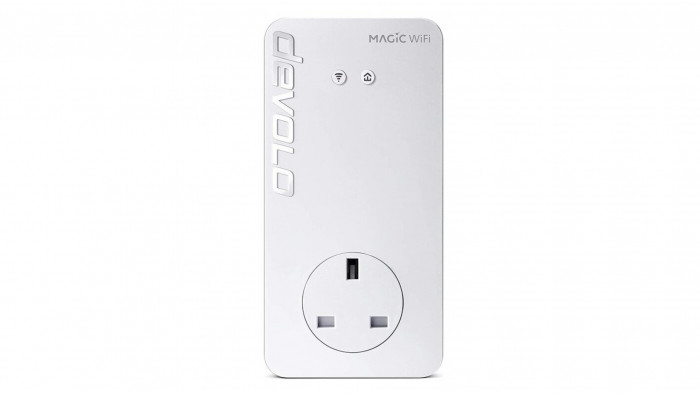 Some homes just aren’t very Wi-Fi friendly. Old homes in particular, built out of sturdy materials, may disrupt your signal to such an extent that you need to look for another solution. That’s where a powerline network comes in wherein the wiring in your home is used to connect remote clients to your router. The Devolo Magic 1 included 3 powerline adapters, each equipped with 2 LAN ports. Plug the first one into your router, connect to the other two, and you can then use them anywhere in the house for fast internet - speeds up to 1200Mbps are promised - or a wired connection. This is a great solution if you want a rock-steady wired connection in your home office, or want to plug in games consoles. 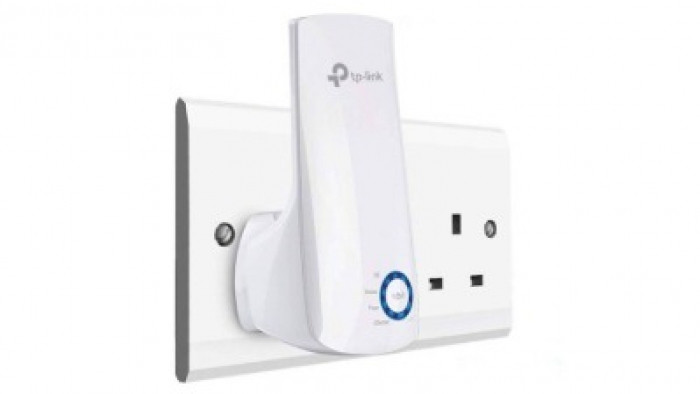 Reviews are strong for this easy to use low-cost extender from TP-Link, so we’ve included it in our roundup on that basis, plus the fact that it’s currently the lowest cost Wi-Fi extender on the market.

What you won’t get here is lots of features or huge range, and speeds top out at around 300Mbps. Having said that, it’s a nice-looking, very compact, little device that plugs straight into the wall. Setup is super simple, requiring just a few button presses to connect to the network. You also get one Ethernet port. If your needs are simple and you don’t need your signal to reach too far, then this could be a good option for you. 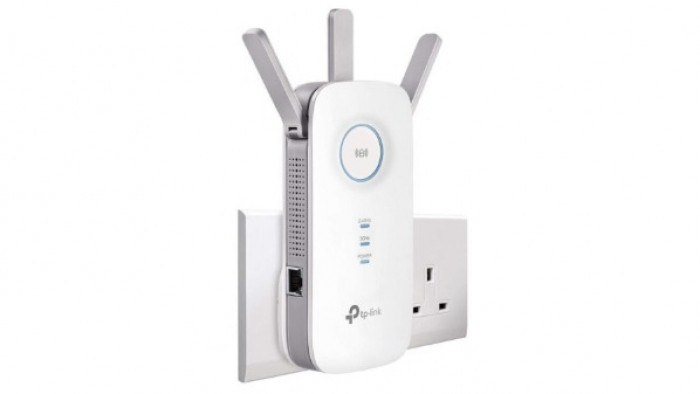 The TP-Link AC1750 is super easy to install. It plugs directly into your wall and features a series of lights on the front that will help you determine when the signal is strong enough, and therefore where best to plug it in. With two fold-out antennas on the side, it’s a neat-looking unit that shouldn’t look too out of place in your home, though it is a little bulky. Performance wise, you should expect good range and throughput. Note, that it does only have one Ethernet port, which may suit your needs, but if you’re looking for a device that will offer you multiple wired connections, then this isn’t the extender for you. 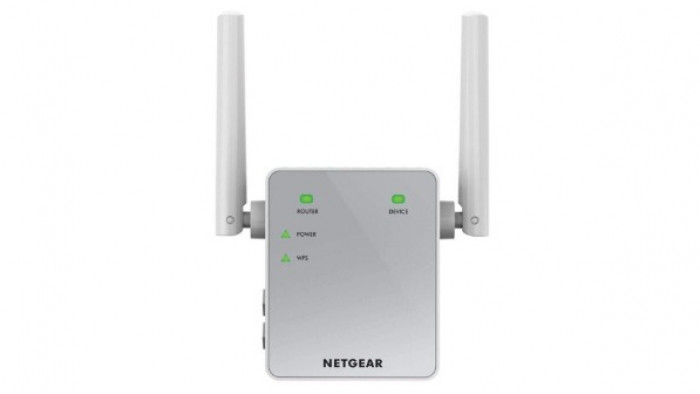 The NetGear EX3700 is not the prettiest device on the market, but it is at least fairly compact and if you’re looking for a budget extender that gets the job done, this could be the right choice for you. It promises coverage of up to 1000sq ft and up to 750Mbps performance. Setup is fairly straight forward: press the button on the extender, wait for a flashing light, press the button on the router, enter the passwords. You should be up and running in around five minutes. This model features one Ethernet port, which is not ideal if you’re looking for multiple wired connections but should be fine for a basic home office setup. 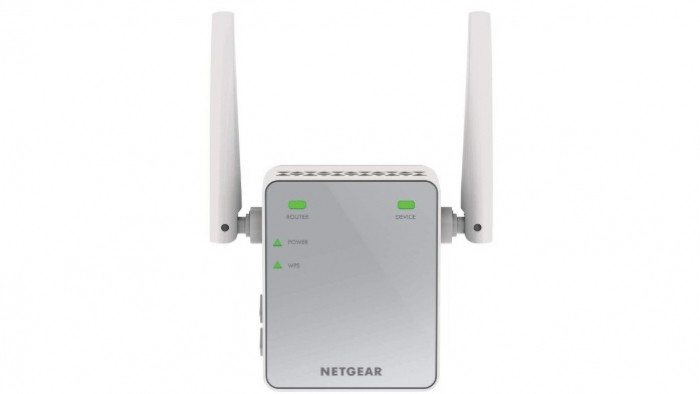 The little-brother of the EX3700, the EX2700 looks and performs much the same, but offers reduced performance in terms of speed (300Mbps rather than 700Mbps) and range (300ft rather than 600ft), and only allows 10 devices to be connected rather than 15. We’re including it because this is the extender we have at home at the moment and, to be honest, we can’t fault it. Setup was straight-forward, following the supplied instructions, and it now sits plugged in on the landing, providing a stable signal to two home offices at once. There are no bells and whistles here and it isn’t going to win any awards in the looks department either, but solid performance for a decent price shouldn’t be sniffed at. 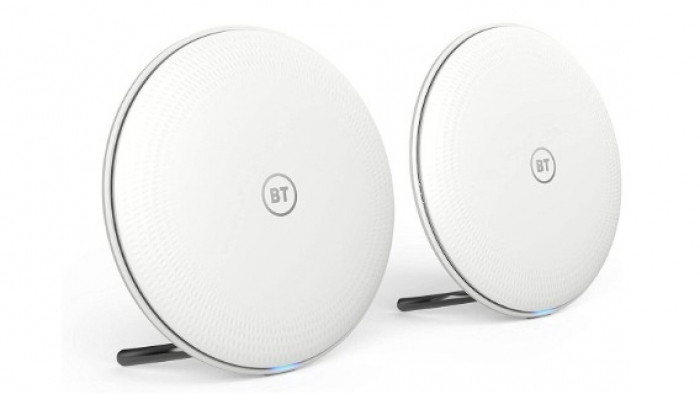 BT’s Whole Home Wi-FI system offers mesh Wi-Fi, which means your signal is spread from multiple points in the home, rather than from a single router. It basically operates a system of routers. Setup is via an easy-to-use app that also offers a host of other controls. Plug the first disc into your existing router, and then plug subsequent discs in to create your mesh network. The result is a connection throughout your home that offers fantastic speed and stability. Of course, this all comes at a price and the Whole Home Wi-Fi system is one of the pricier options out there. But, you’re getting good value here compared to other mesh systems. 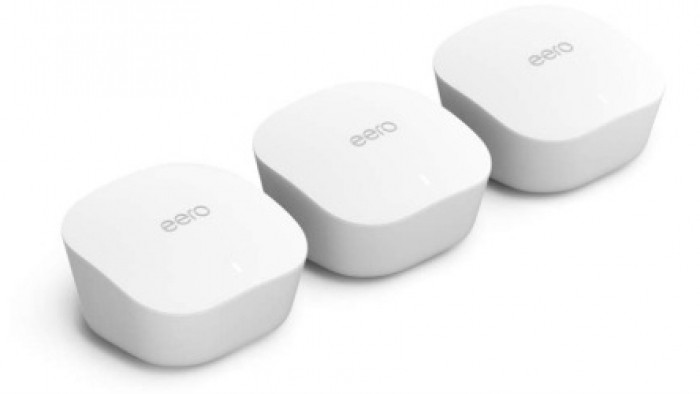 From £99
Buy now from Amazon

Like BT’s Whole Home Wi-Fi system, Amazon’s eero is a mesh Wi-Fi solution that allows you to extend your network through your home using multiple devices. The difference here is that eero replaces your router entirely. Plug in the cute-looking eero device to your model and the eero app will walk you through the setup, then you can place subsequent units throughout your home to get the best signal throughout the house. You can also expect software updates in the future to keep your network in tip-top shape. Design wise, this is one of the best-looking solutions on the market and we love that it connects with Alexa for voice control. 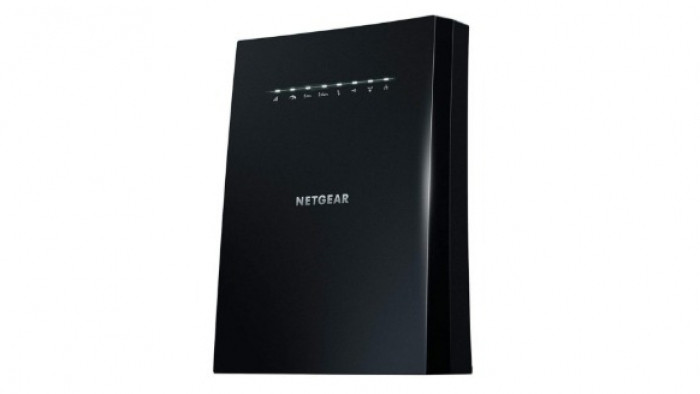 The Nighthawk EX8000 might sound like an ’80s TV show about a man who solves crime with the help of a futuristic talking helicopter, but it’s actually an extender that functions like a mesh network without the need to replace your router. What this means is that, unlike many Wi-Fi extenders, the EX8000 gives you seamless coverage - you don’t need to login to a separate network to benefit from the extended signal. The EX8000 uses a dedicated radio band to talk to your router, giving you a seamless connection throughout the home. It’s pricey and it’s also rather bulky, although it’s a good-looking piece of kit. You can connect up to 50 devices and benefit from a range of up to 2500sq ft.

What to look out for when buying a Wi-Fi Extender

Before you buy any Wi-Fi extender, it’s worth thinking about what level of Wi-Fi you’re going to need throughout your home. If you’re just looking to fill in a few Wi-Fi dead spots upstairs, then a carefully placed budget extender, plugged in on the landing, might well do the job for you, giving your signal that extra boost it needs.

On the other hand, if you need a rock-solid connection and are looking to use multiple devices, or are downloading or streaming lots of data (either movies or gaming), then consider a solution with multiple Ethernet reports for wired connections, or a Powerline option.

Speed, of course, is one of the main things to look out for. Measured in Mbps, the faster the better, but be aware that the levels quoted by manufacturers are theoretical only and will be affected by the strength of the signal coming into your home. None of the devices we’ve used previously have quite measured up their advertised speeds.

Previously, the demands on our own home Wi-Fi were limited, but now there are two home offices in the house, a stable connection is a must. A choice of wired or wireless connections has also given us the extra bit of security that we need. Now we don’t have to worry about dropping signal during a crucial Zoom call with the boss and downloading big files is a breeze.