If you are a child of the ’80s, then you’ll agree with us that growing up with the movies of Arnold Schwarzenegger was a very special experience. His massive name emblazoned on a VHS would mean one thing: that movie would rock, hard.

Whether he was carrying an actual tree, covering himself in mud to hide from an ugly alien, or getting his ass to Mars, his towering performance would always turn an average film into a fantastic one.

UPDATE: Commando is now officially 35 years old. The movie, directed by Mark L Lester, is the pinnacle of the 80s. Released slap bang in the middle of the 80s, it's a testosterone-filled revenge actioner where Arnie takes on an army to get his daughter back. It's utterly ridiculous and everything you want in an action film - and, to be honest, it should be higher up in our best Arnold Schwarzenegger movies list.

Arnold may well be 72 now, but his action days are far from over. He was recently seen as the T-800 in Terminator: Dark Fate - his beard may be greying but the one liners are still there - and seems to be an Instagram addict.

So, here are the 10 best Arnold Schwarzenegger movies, ranked according to you.

You can read our in-depth selections below. But, after much voting, Terminator 2: Judgement Day is your top pick, and Predator comes in a close 2nd. 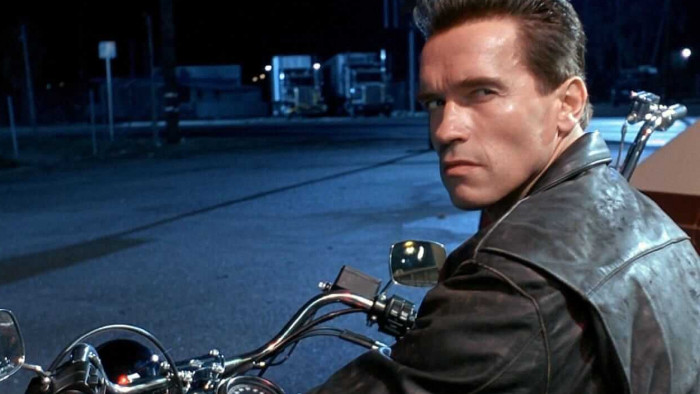 Judgement Day is a sequel that takes the original premise of The Terminator, flips it on its head and by doing so creates one of the greatest blockbusters ever made. Arnie is back but this time he’s a good guy, out to save John Connor from the evil, melty T-1000. The reason: he’s the eventual leader of the Resistance and the only one that can stop Judgement Day. Everything about T2 is epic - the action sequences are visceral, the effects still hold up well today and Arnold shines as protector to John Connor, adding some much-needed laughs to the movie. But the biggest change goes to Linda Hamilton - she’s badass as the beefed up Sarah Connor, ready to fight anyone who gets in her way. 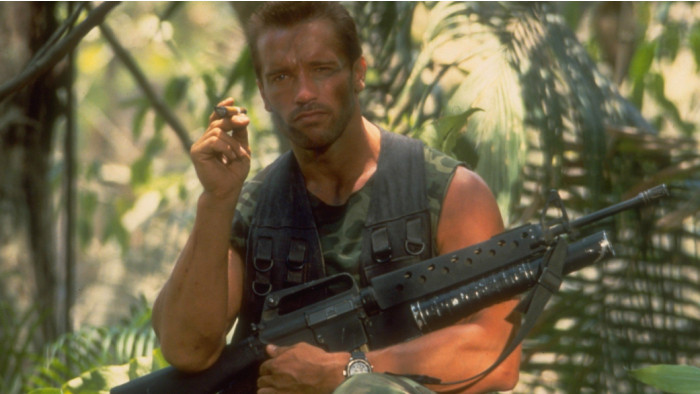 There’s a scene in Predator where it’s just Arnold Schwarzenegger (Dutch) and Carl Weathers (Dillion) shake hands and the camera just focuses on their bulging muscles. That pretty much sums up Predator - a bunch of testosterone-filled soldiers who are trying to one-up themselves, when it comes to capturing an invisible alien. The results are hilarious and bloody and bloody hilarious. This is Scwarzenegger at his most ridiculous and we are all for it. 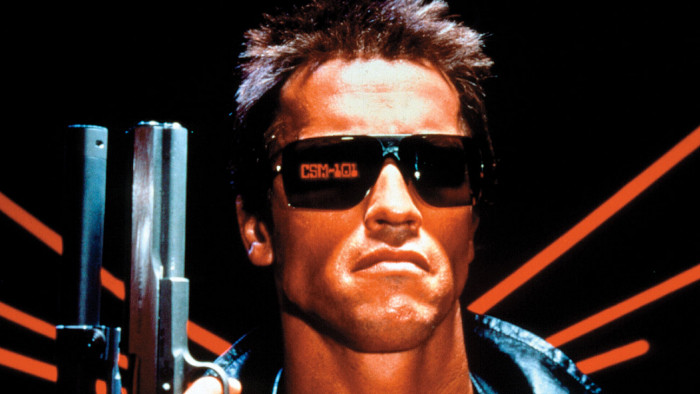 “I’ll be back.” That there is one sentence of just 17 that Schwarzenegger menacingly mutters in The Terminator. The look and feel of this movie is fantastic. It’s grimy; a low-budget slasher pic that swaps out a homicidal killer for a homicidal robot sent back in time with only one objective: to kill Sarah Connor (a brilliant Linda Hamilton). Yes, some of the effects look hokey now but there is still real fear here. The Terminator is exploitation filmmaking at its finest and there’s nobody better to portray a monosyllabic robot than the Austrian oak. 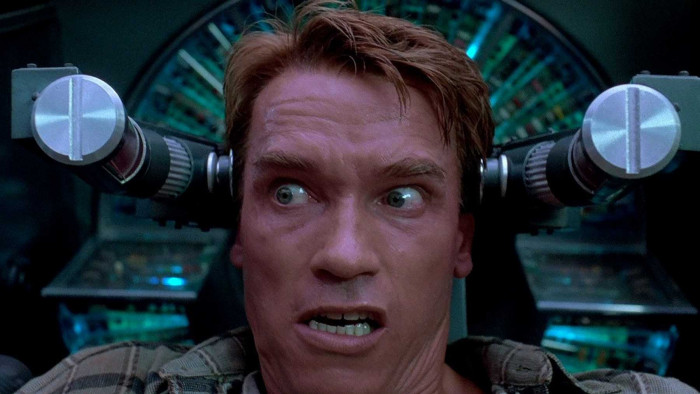 Quaid is bored of his life, so heads to his local travel agent for a little holiday. The thing is: the travel agent deals only in virtual holidays, where the participant can be whoever they want to be - they just get the memory implanted in their head. What ensues is a delicious sci-fi actioner where Schwarzenegger finds himself on Mars, as a secret agent battling evil corporations that want to take control of the air, or does he? Does he? We haven’t got a clue and neither does Arnold but it’s fantastic fun. 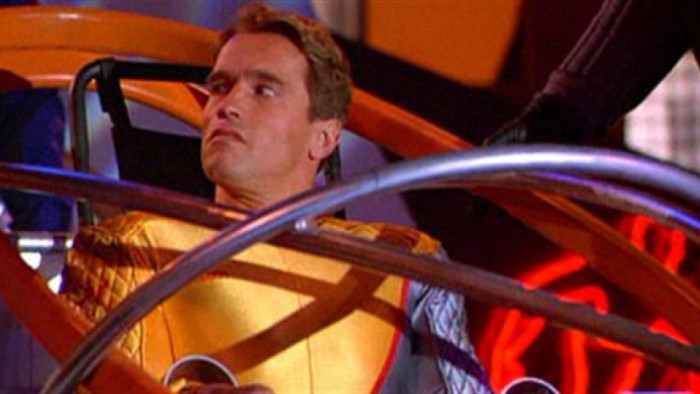 Out of all the movies on the list, The Running Man is perhaps the schlokiest but it’s one we hold close to our hearts. Based (very loosely) on a Stephen King novella, the movie is set in the near future and is about a Gladiator-style game show where contestants (former convicted criminals) fight to the death against armed mercs. The result is a pretty decent visceral thriller that wouldn’t be out of place in a series of Black Mirror. Arnold spends most of the time in lycra throwing out one-liners all over the place. 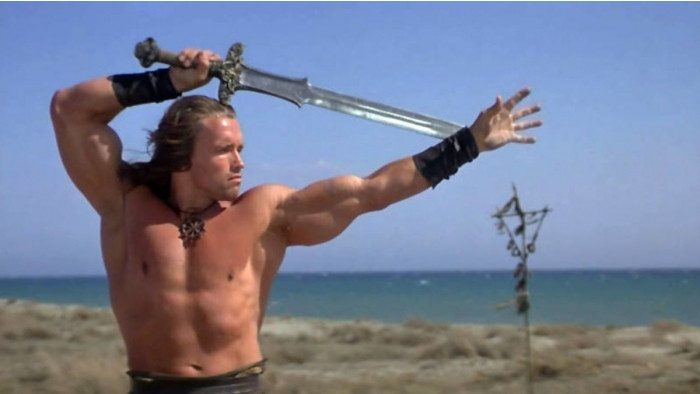 Directed by John Milius - the man that the Walter from The Big Lebowski was based - this madcap fantasy film sees Schwarzenegger early in his career. It’s pretty much a given that he was hired purely for his muscles (which is fair), but he does offer some gravitas to the role, holding his own in the presence of Hollywood heavyweights Max Von Sydow and James Earl Jones - all while spouting Nietsche-inspired dialogue and cutting the heads off of giant snakes. 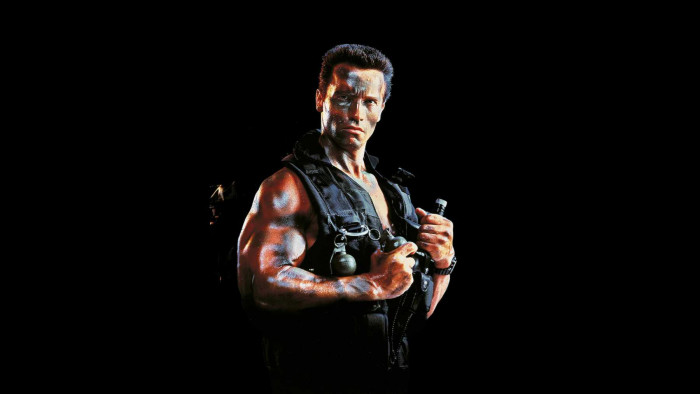 The beginning of Commando is serene. John Matrix (Schwarzenegger) is playing with his daughter, cutting down trees and carrying them on his own and having a jolly old time. Then his daughter is kidnapped and it all goes downhill from there. Matrix heads to his shed, which is packed with guns, and goes on a mission to find his missing daughter. What ensues is mayhem, one-liners and Schwarzenegger and his action-hero best. 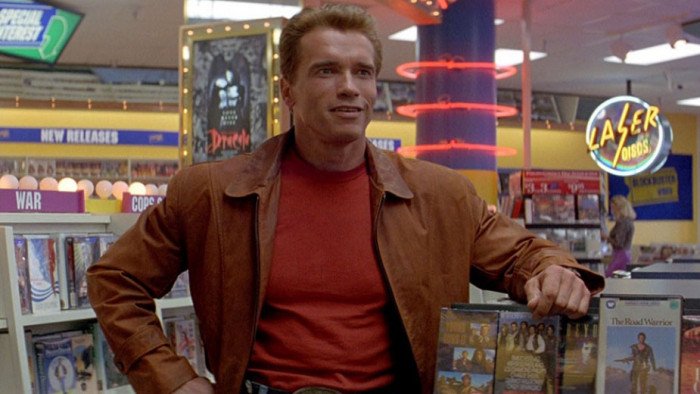 Sometimes a little too meta for its own good, Last Action Hero is one of those movies that was way ahead of its time. Arnie plays Jack Slater, a Hollywood action hero who befriends a boy who gets sucked into his fictional world. As Schwarzenegger doesn’t exist in this world there’s some delightful spins on Arnie’s movies of the past - with the likes of The Terminator being played by Sylvestor Stallone. The proper action starts when Slater enters the real world to make sure that the real Arnold Schwarzenegger isn’t killed, as that would also kill Slater. Confusing, yep. But great fun, too. 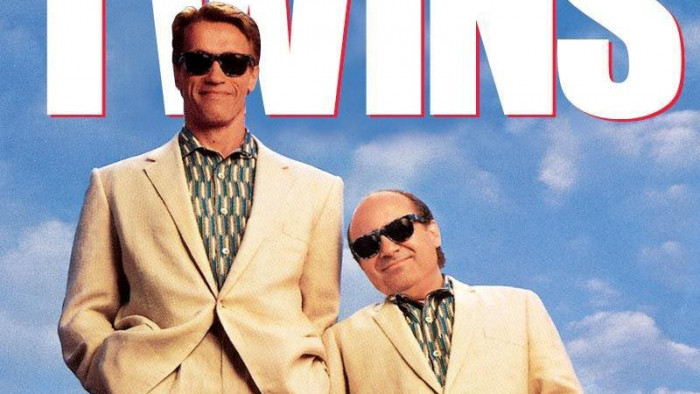 Under the steady eye of Ivan Reitman (director of Ghostbusters and, er, Kindergarten Cop), the premise of Arnold Schwarzenegger and Danny DeVito finding out they are twins turns out to be a masterclass in comedy. Yes, most of the jokes focus on his muscles and how strong he is but Twins proves that there is more to the Arnold than the action side. A sequel, Triplets, has been mooted since 2012 in which Arnie and DeVito find out that have another brother, set to be played none other than Eddie Murphy. Here's hoping Triplets emerges from development hell in the near future. 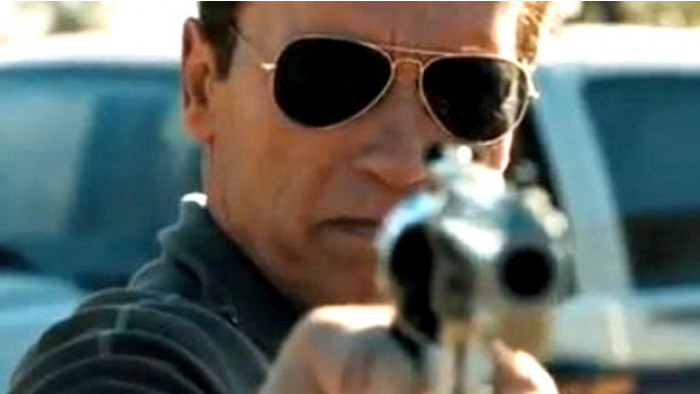 There is a lot to like about The Last Stand. For a start, it’s a really well made action flick. Directed by the fantastic South Korean filmmaker Jee-woon Kim (his first English-language movie), it’s about a Sheriff (Schwarzenegger) stopping his town becoming overrun with drug runners. It’s pure popcorn for sure, but it’s over-the-top violence nods back to 80s Arnie flicks and the man himself is fantastic as the elder statesmen protecting his town.