You couldn't make these up. 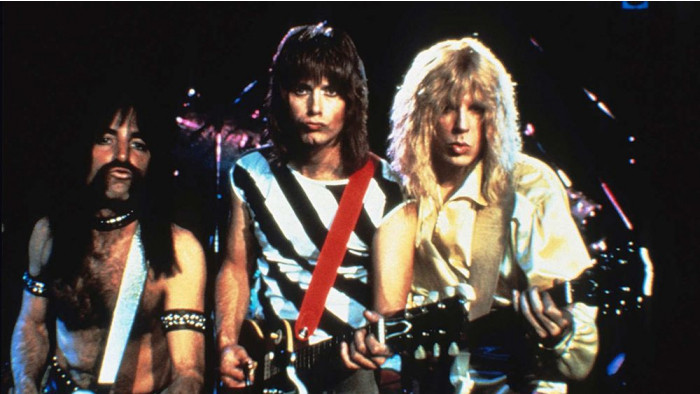 Spinal Tap Killed Rock’n’Roll could easily be the title of a Spinal Tap album. But it is also the truth.

Not long before This Is Spinal Tap rock bands still roamed around like deities: their every utterance taken as an earth-

shattering pronouncement; every ludicrous demand catered for without question. People still referred to Eric Clapton, with a straight face, as ‘God’. People still gasped as Led Zeppelin came onstage beneath a giant papier-mâché Stonehenge triptych, shrieking lyrics about Gollum. People didn’t snigger when long-haired, politely spoken cocaine addicts in fur coats said their latest work – titled something like ‘My Love Gun Is Fully Loaded’ – was influenced by Mozart and Saint Francis Of Assisi.

But after Tap, their existence began to seem like the stupidest thing ever.

There is a story about Eddie Van Halen first watching the film, unable to understand why all his friends were in hysterics. To him, it seemed normal: the amps that go up to 11, the tantrums about the bread being too small and the childish bickering. He wasn’t alone. Many bands and rock stars of his generation had a similar reaction. Initially, at least: pretty soon they had to start acting like they were in on the joke, or risk being laughed into irrelevance.

And so rock’n’roll became self aware. Bands born post-1984 would fret about being seen to be like Spinal Tap. Soon you had new poster boys like Kurt Cobain, who cringed at the idea of the excessive Golden God, to whom This Is Spinal Tap became a manual of things not to do.

But rock’n’roll bands being rock’n’roll bands, there were, are and always will be, moments that slip through the net. There is no band that has not experienced a ‘Spinal Tap moment’, no matter how self aware they might be.

As Tap themselves put it: “It’s all a joke, innit?”

Reviews: bands of any generation uniformly say they don’t give a sh*t about them, and Tap are no exception. One review of their album Shark Sandwich famously consisted of merely two words: “Sh*t sandwich”. Harsh? There are real life bands who have received one word less: Melody Maker’s review of Yes’s 1973 album Tales From Topographic Oceans in full was just “No”, while, in similar style, NME appraised Def Leppard’s covers album Yeah! with – you guessed it – “Nah!”

2. Gig in an airbase

Many events in This Is Spinal Tap are rumoured to be based on real life, but one that definitely happened is the scene in which they are booked in to play at an airbase. This came from Heep keyboard player – and sometime member of Spinal Tap – John Sinclair, who went on to record with Christopher Guest from one such show: the posters read ‘The Uriah Heep Show, 50 million records sold, 2nd only to Abba in popularity’.

Having penned a beautiful, Mozart-inspired piano ballad in D Minor (“the saddest of all keys”), Nigel Tufnel opts to give it the less beautiful title of Lick My Love Pump. Frank Zappa was apparently in an equally oxymoronic mood when he christened his 1977 slice of playful, easy-listening free jazz I Promise Not To Come In Your Mouth.

Actually happened to: The Troggs

“You can’t concentrate because of your f*cking wife, OK?” explodes one half of the creative core (Nigel) of Spinal Tap at the other (David), to the silent horror of the rest of the band and their crew. This is nothing compared to the real, 1970 inspiration: a studio tape of The Troggs shouting and swearing (mainly swearing) at each other, trying to nail a career-reviving hit. Available on YouTube, but NSFW.

Goliaths of Seventies rock – Led Zeppelin and Black Sabbath – had Stonehenge stage sets, but Sabbath’s edges ahead in the ludicrousness stakes, by… well, let bass player Geezer Butler explain: “We had Sharon Osbourne’s dad, Don Arden, managing us. He came up with having the stage set be Stonehenge. He wrote the dimensions down and gave it to our tour manager. He wrote it down in metres, but meant to write it in feet. The people who made it saw 15m instead of 15ft. It was 45ft high and we just had to leave it in the storage area. It cost a fortune to make, but there was not a building on Earth that you could fit it into.”

Derek Smalls’ decision to wear a groin-enhancing tinfoil-wrapped cucumber down his trousers while navigating airport security is surely one of the most gleefully embarrassing moments in modern comedy. Smalls is, of course, caught out, in much the same way former X Factor stalwart Tulisa was in 2012, when the ‘Rampant Rabbit’ in her bag started vibrating during an airline check-in.

Actually happened to: The Band in The Last Waltz

One of the key inspirations for the documentary style of Spinal Tap was Martin Scorsese’s gushing 1978 film The Last Waltz, which documented the last concert by The Band. In it, among other hilarious interview segments, is a discussion of how they arrived at their name, which is strikingly similar to Tap’s journey from Lovely Lads to The Originals to The New Originals and beyond. “Well, we were The Hawks,” muses Richard Manuel. “But it was right in the middle of that whole psychedelia… Chocolate Subway, Marshmallow Overcoat. Those kind of names, you know? We started out with The Crackers. We tried to call ourselves The Honkies. Everybody kind of backed off from that. It was too straight. So we decided just to call ourselves The Band.”

Tap’s decision – mid-tour – to forego their heavy-metal hits and devote an entire gig to Derek Smalls’ baffling ‘Jazz Odyssey’ is a perfect satire on the pop star’s tendency to place their own ego several rungs above their audience’s enjoyment. For proof, see Sting, whose ludicrously self-indulgent 2010 album Symphonicities – which reinterpreted his hits as classic symphonic compositions – went on to become his worst-selling ever.

One of the film’s best-loved moments finds Tap trudging through a labyrinthine backstage area, yelling “Hello Cleveland!” without finding the stage door. Cape-wearing prog lord Rick Wakeman recalls a similar incident with Yes: “We had this immense tunnel based on a giant Slinky that we would march out of on to the stage… The crew hated it. It was impossible to cart around. One show, they took revenge. We strode along it, half noticing the sound of the audience was getting further away. Finally, we came to a halt by a large green exit sign. The crew had directed the tunnel away from the stage.”

Actually happened to: Too many bands to mention

Perhaps Spinal Tap’s best known addition to pop culture is the amplifier with dials that go up to 11 (“one louder” than 10). Christopher Guest notes: “Marshall made a special plate for me that went up to 11. Subsequently they have done some ads with me, and my new amp actually goes up to infinity on the dial. They made a real amp that goes up to 20; that’s the one people can buy in stores. But mine goes up to infinity. This has been ripped off big time. Almost every amp company now sells knobs that go up to 11.”

As a homage, the rating on the IMDb page for Spinal Tap also goes up to 11.

11. Failing to impress a soul legend

St Hubbins’ cringe-inducing attempts to ingratiate himself with a black soul singer in a hotel lobby have echoes of this story from the Rolling Stones’ Ronnie Wood: “I have fond memories of when Mick Jagger and I went to see Marvin Gaye. Mick tried to impress him with his knowledge of soul music. After about an hour, our host said, ‘That’s great, why don’t you tell that to Marvin? He’ll be here shortly.’ Mick had been talking to Marvin’s brother.”

Despite being famed for “raw power, exuberance and punctuality”, Tap came from hippy stock, shown by their 1967 single Listen To The Flower People. Not unlike Status Quo who once had pudding-bowl haircuts and silken blouses for psychedelic hit Pictures Of Matchstick Men.

13. Getting trapped inside a stage prop

Actually happened to: U2

Let’s be honest: if there’s anyone on this planet who deserves to get trapped inside a giant fake lemon, it’s Bono. And when the big-hearted numpty managed to do just that during the band’s 1997 world tour, it was pleasingly reminiscent of Derek Smalls’ on-stage incarceration inside an ‘alien pod’ during Tap’s performance of Rock’n’Roll Creation.

Tufnel’s brilliantly petty tantrum over pre-gig catering (“This miniature bread… I’ve been working with it for half an hour and I can’t figure it out”) came just a few months after Van Halen’s similarly diva-ish insistence that their rider must feature a bowl of M&Ms that had all the brown ones removed. The band’s singer Dave Lee Roth later claimed this was purely to keep promoters on their toes: “If I came backstage and saw brown M&Ms, it guaranteed they had not read the contract, and we had to do a serious line check.”

Ahhh, the ‘none more black’ minimalist statement album cover. The height of empty pretension. Prince did it, Metallica did it, Jay-Z did it… all long after Spinal Tap – or, rather Spinal Tap’s label, which was appalled by their charges’ sleeve for Smell The Glove and its sexist overtones. Speaking of which…

Actually happened to: Whitesnake (Lovehunter and Slide It In)

There are innumerable mid-Eighties contenders for this. But Whitesnake are in a league of their own.

17. Getting the pizza guy wrecked

A YouTube-able deleted scene in which the band invite the limo driver for a raucous afterparty when he arrives with their pizza calls to mind a story Noel Gallagher told ShortList in 2011: “One night – mountains of drugs everywhere – and a bloke came to deliver pizzas. We were like, ‘Have a drink!’ He had the f*cking greatest night of his life.”

One of the most tragic scenes in Spinal Tap comes when the group are overjoyed to hear a radio show playing one of their old songs Cups & Cakes, for the DJ to announce over its outro that the band are “currently residing in the ‘Where are they now?’ file”. Worse than this happened to Gary Numan who, in a long period of not being able to get arrested following his late-Seventies mega-fame, heard Radio 1 finally deign to play his new single. Only for the DJ to quickly declare it to be a mistake…

John ‘Stumpy’ Pepys: bizarre gardening accident. Eric ‘Stumpy Joe’ Childs: choked on someone else’s vomit. Mick Shrimpton: spontaneously combusted. The list of Tap drummers and their deaths is near-endless. Perhaps the only real band that can match their roster is Lynyrd Skynyrd, whose list of current and former members is so long it has its own Wikipedia page.

20. Reforming for ‘one final tour’

Actually happened to: Every band, ever

All it takes is a tiny catalyst for hatchets to be buried: Spinal Tap’s was their song Sex Farm inexplicably becoming a hit in the Far East. Rest assured, if they haven’t already, whichever band you obsessed over as a 15-year-old will be next.

You can buy This Is Spinal Tap right here