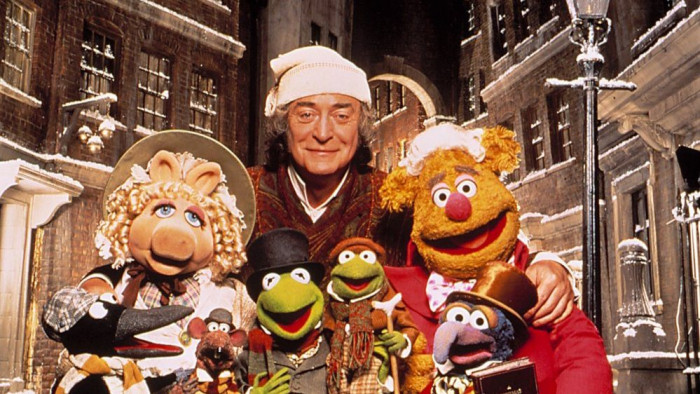 Christmas is a dark time. When you’re a child, Christmas is all joy: you are protected from life’s awfulness under a thick layer of tinsel and food and presents. When you’re an adult, it becomes a stress: money and familial politics and death. Thank god for the Muppets.

But for a children’s movie, one stocked with singing, anthropomorphised animals (and monsters (and sometimes cabbages)) made of foam and metal wire covered in felt, fleece, and faux-fur, The Muppet Christmas Carol is dark as fuck.

In the opening song, Paul Williams’ bouncey Victorian beat soundtracks the main character with lyrics about him starving people to death at the most wonderful time of the year. Scrooge, literature’s most supreme Tory, a money-lending businessman in a top hat and tails, works his charges to exhaustion and pays them a pittance so they can help him squeeze as many shillings as out of London’s impoverished puppets as possible.

You know the story: Michael Caine, a tight-fisted hand at the grindstone, sitting behind a big dusty desk surrounded by his clerks (played by rats) , throws out an old geezer whose daughter is dying of some vague lung ailment into the snow because he can’t pay his mortgage.

A squeezing, wrenching, grasping, scraping, clutching, covetous, old sinner, Scrooge’s oyster eyes exude pure hatred for the holidays: which are just another excuse for people not to pay him… Caine plays him straight, as a horrible old curmudgeonous shithouse, and absolutely volleys in all of the best lines (cribbed almost directly from Dickens’ original).

When told by Scrooge to prep eviction notices to go out the next day, a freezing cold Bob Cratchit (played by Kermit) mumbles “Bu-but tomorrow is Christmas, sir…” with his shrivelled little frog balls quivering between his legs.

“Then you may gift-wrap them,” says Scrooge.

In between all the jokes (and there are loads of them) and great lines (them, too: “There’s more of gravy than of grave about you!” still bangs), Muppet Christmas Carol is a kids film about death.

For me, Christmas is about death. I can’t help but count my life up in Christmases: how many I’ve had so far and how many I reckon I have left before I am worm food. Saying, “He died aged eighty-one-Christmases” seems much nicer.

Christmas is the death of the year, after all. Forget NYE – with its fanfare and handholding, begging you to count down to midnight as you queue for two hours to see fireworks and for an hour to get served at the bar, surrounded by people who aren’t usually allowed to get drunk singing a half-remembered rendition of ‘Auld Lang Syne’ – sitting on the sofa at my parents house watching Stuart Little while being systematically filled with cake until I reach bursting point is how I mark up the death of the year and reflect.

I’ll never forget watching my mum sit at the dinner table and slowly crossing out name after name from her Christmas card list, as family members and friends started falling away in little bunches, as sometimes happens. Subconsciously, Christmas became a time of stocktaking – a silent tally of who had died and who’d been born, who’d gotten married and who got divorced, and, more personally, where I saw myself compared to last year.

As a child, watching Scrooge be brought to the near future to cry at his own grave by the Ghost of Christmas Yet To Come, a giant hooded ghost with a black hole for a face, while a huge spider in a crumpled hat loots your corpse, is quite a deterrent to not be an arsehole. But watching back now, it's the Ghost of Christmas Past that’s scariest.

She(?) take Scrooge through his early years, and you can’t help but think: Fuck, life is pointless and short, isn’t it? You work hard to achieve your goals getting a pep-talk from Sam The Eagle and then, before you know it, you will be old and sad and alone, led around your memories by an ethereal, nightmarish ghost-child. Is that the true meaning of Christmas? Possibly. When we’re children, Christmas is pitched to us as a time to contemplate and give thanks, Christmas is about remembering: what we have and what we had and, inevitably, where we fucked up.

Where Scrooge fucked up, we find out crushingly, is in choosing hard work over the love of his life, Belle. He has done ‘the right thing’ by focusing on his goal and summarily destroyed his life in the process, only to be rewarded with all-time weeper ‘When Love Has Gone’.

Deemed too sad for children to handle on release – it was hidden from theatrical cuts and used only to torment kids lucky enough to own it on VHS – the song still cuts up. It’s horrible: sappy and slow, and yet it still gets you: pummelling you right in your chest and stomach and liver. Belle glides around young Scrooge in a frozen field as old Scrooge looks on. It is three minutes and 38 seconds of pain, like a round against a prime Ricky Hatton in a silk bonnet.

All of the songs hold up brilliantly, thankfully avoiding any dated attempts at modernity in favour of timeless catchiness (which is, as it happens, the reason why The Simpsons fell by the wayside: early episodes are confident and timeless – as funny now as they were then, and later ones are stuck trying to attract a new audience with jokes about iPhones, as the old one drifts away…) and mood.

Paul Williams goes hard on Christmas cheer while Teen Wolf, K-9, and Sister Act 2: Back in the Habit composer Miles Goodman mostly gets to have some fun with pitch-black soundtrack bits for Ghosts Past and Yet To Come, haunting children (and adults) in the 25 years since.

Returning to big screens this month, that such a fucked-up film can still resonate such extreme Christmas cheer has a lot to do with the love and direction imparted by Brian Henson, son of legendary Muppets founder John, who treats the story and his furry little characters with due respect.

For two thirds, Gonzo is charming and straight enough to keep the story going while Rizzo does a wanker-sign behind his back; Kermit is the simpering and pathetic moral arbiter while Miss Piggy cares for all their children; and Caine plays Scrooge like he means it, never pandering to the young audience.

The film ticks along until Henson has the confidence and ability to play the final scenes almost entirely serious, resting assured that people genuinely care what happens in this story, even though we all know it ends with Scrooge hanging out his window and throwing money on the floor, ordering some kid to buy a big fuck-off turkey, in a way that’s kinda sweet but still resonates with the dickhead core of the character.

According to the Guardian, when Michael Caine met Henson to talk about playing Scrooge, one of the first things he said was: “I’m going to play this movie like I’m working with the Royal Shakespeare Company. I will never wink, I will never do anything Muppety. I am going to play Scrooge as if it is an utterly dramatic role and there are no puppets around me.”

As Henson adds: “You need to go to those dark places for the ending to be as joyous as it can be.”

This article was originally published in December 2018.