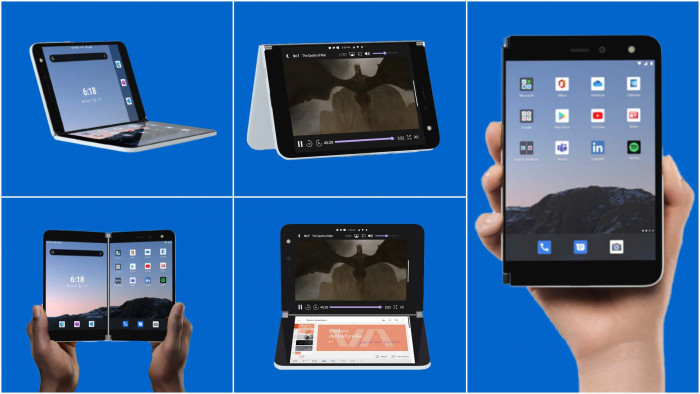 The Microsoft Surface Duo is Microsoft’s stab at a foldable phone but it has one big USP compared to the likes of the Samsung Galaxy Fold and the Moto RAZR series: it has two screens, not one, that fold on to each other.

The Surface Duo was originally a device that Microsoft sold on its official site, but now you can get it on a pay monthly contract it’s become more widely available and for good reason: it’s a portable powerhouse, designed to help with work and not forgetting that we all need a little play sometimes, too.

Here are 5 things to know…

1 It’s unlike anything else we’ve tested

Foldable phones, for many, are still futuristic devices that haven’t quite found their place. We’re fans, though, and because of the revolutionary form factor can overlook a niggle here and there. With the Microsoft Surface Duo, things are a little different - it’s the first device that feels like an ‘inbetweener’. It’s a foldable you can make calls on it but it’s a little too big to call it a smartphone. It’s more a tablet that folds into a more convenient pocket shape that you can make calls on.

Connections on board include an eSIM and nanoSIM and USB-C - there's also a fingerprint sensor on the side.

Unlike other foldables, which make use of bendable OLED screens to go from a small screen to a bigger one, Microsoft has completely separated its screens. What you get are 2x 5.6-inch AMOLED 1800×1350 (4:3) screens protected by Gorilla Glass. When the Surface Duo is unfolded, these act as one 8.1-inch screen, albeit with a hinge and some bezel separating the pair.

Having two screens is a bit of a statement by Microsoft as it showcases that you can have two things working independently on this device if you want to, something that was always a bit confusing on ‘one screened’ foldables. Having separate screens does lose the cool factor a little but it makes a lot of sense from a productivity point of view.

For us separate screens felt more durable, too. The hinge was sturdy and because you aren't dealing with expensive AMOLED tech bending each time you folded the Duo, we felt we could be a little more hardy with the device. The soft close nature of the Duo was lovely, too, as you never felt like you were slamming two screens together when closing the thing.

3 It’s Microsoft but not Windows powered

As we all know, Microsoft ducked out of the mobile OS game a while ago so the Microsoft Surface Duo works on Android. This is a good thing. Android is infinitely more customisable and familiar to many who have a phone. This doesn’t mean that Microsoft has ducked out of adding software to the device - in fact it’s supercharged it, something that will be welcomed by those who are currently wedded to Microsoft Office and the like.

Among other apps, you get access to: Outlook, Teams, Edge, Office and also a number of services that take advantage of the dual-screen nature of the device. Those who bow to Google, though, also have many a G app pre-installed (Docs, YouTube, Gmail and the like) which only adds to the ‘dual’ nature of the Surface Duo.

4 Two screens are better than one

Double the screens does equal double the fun with the Microsoft Surface Duo. At its simplest you can use the Duo Surface to doom scroll Twitter while catching up on your emails on another screen. At its most advanced, you can use enhanced apps to do things like read a Kindle book like an, er, book and take advantage of the extra screen real estate with something like OneDrive, having the folders and files on one screen and the document you are using on the other.

Not every app is compatible with dual screens, so it will take you a while to figure out what is optimised and what isn’t but we found anything that isn’t meant you could just load up another app to use on the other screen. It really is a device for multi-tasking and for short train journeys we didn’t feel the need to whip out a full laptop when using the thing.

5 We want a bit more power

While Android was definitely the right OS to use on the Microsoft Surface Duo, with the apps on offer it does feel like there’s something more that can be done with the device - with our time we felt we just scratched the Surface of what could be done. And while there wasn’t noticeable slowdown when using both screens, we do think if the device ever gets updated then 6GB of RAM should certainly shift to 8GB or more, given the multiple screens and the size of the screens.

We’d also like to see 5G on the thing and while there is a camera on board - an 11MP front-facing camera - the form factor of the Duo meant we were never really compelled to use it. If there was some sort of AR reason, though (which would suit the form factor more) then it would certainly mean the camera isn’t left redundant.

The Microsoft Surface Duo is unique in the gadget world, straddling the ‘laptop replacement’ and ‘foldable phone’ categories. For this, Microsoft should be commended - it’s trying something different in a gadget world awash with glass rectangles.

We felt the Duo was best as a tablet where we could use both screens and take advantage of the enhanced apps on offer. A little bit more refinement and Microsoft will be on to a winner with the Duo - a few more dedicated duo apps and maybe a touch more power will make this a real contender.

The Microsoft Surface Duo is available on contract from EE. Alternatively you can buy it from Microsoft’s official store from £1,349.