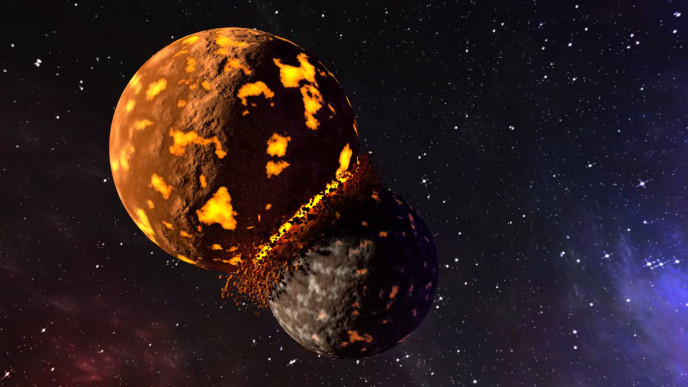 Our existence is one of the most unlikely things to have ever occurred. Life as we know it can only exist within a lot of parameters – the right temperature, the right amount of light and exactly the right amount of various substances were essential to life developing on the planet. If any one of them was slightly off, life on Earth would either be very different or, more likely, non-existent.

The right amount of certain substances is such a key bit, and prior to now, the general thinking was that these “volatile elements” (carbon, nitrogen and sulphur, all essential) had arrived over millions of years of the planet being hit by meteorites.

A new study published in the journal Science Advances suggests that it might actually all have turned up at once, in an enormous collision with a planet-sized object – the same collision that caused what is now the Moon to break off. The scientists propose that a still-forming Earth was hit by a Mars-sized object 4.4 billion years ago, which delivered these volatile substances in sufficient (but, essentially, not excessive) quantities.

The paper itself is completely incomprehensible to laypeople (wazzup), but as luck would have it, the authors (Damanveer S. Grewal and Rajdeep Dasgupta of Rice University) have done some press. Dasgupta told Gizmodo: “What we show in  is that when one considers carbon, nitrogen, and sulphur together, delivery via a giant impact or merger of the proto-Earth with a Mars-sized planet is the most likely solution. […] Our study challenges the existing models of volatile element delivery methods. It also solves the long-standing problem that the volatile element ratios of the surface layers of Earth are distinctly different from the planet-forming building blocks that we know as chondrites.”

Simple, right? Chondrites are the meteorites that were previously thought to have delivered the volatile substances to Earth, but due to the typical ratio of these substances to one another within a chondrite not lining up with the ratios on Earth as a whole, the theory hasn’t always sat well with geologists and astronomers (and whatever someone that does a bit of both is called – probably an astrogeologist, right?). This new theory fixes that.

What does it all mean, though? Well, in the grand scheme of things, not that much, but it does make our existence even more unlikely than it was before. If the Mars-sized object, or the proto-Earth, had been anywhere different (and space is massive, there’s lots of places the could have been), we wouldn’t exist. Heavy stuff. Also, it possibly means we’re all aliens. Maybe? Right?