Culture clash! The Gentlemen stars Hugh Grant and Matthew McConaughey pit the UK against the US 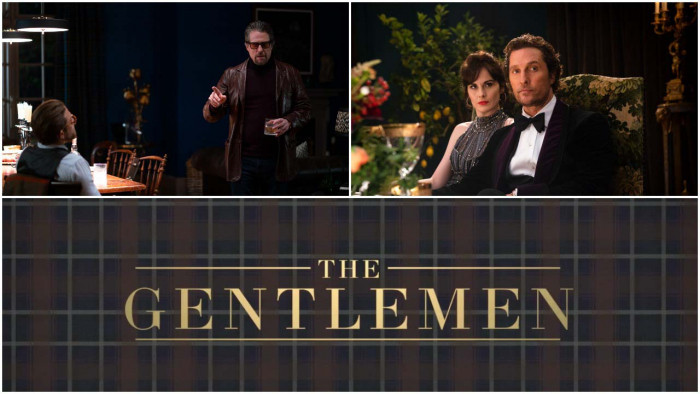 By Chris Tilly
23 December 2019
Hugh Grant and Matthew McConaughey don’t share a scene in new film The Gentlemen. Both actors star, but their characters spend the movie avoiding or talking about each other rather than actually meeting.
But the duo recently got together for a chat with ShortList, in Guy Ritchie’s Fitzrovia pub Lore of the Land. Which is fitting as Ritchie co-writes and directs The Gentlemen, a gangster flick in the vein of his acclaimed crime capers Lock, Stock and Two Smoking Barrels, Snatch, and Rocknrolla.
In The Gentlemen, Grant plays a shady private investigator digging up dirt on McConaughey’s gangster, an American who has built a lucrative marijuana empire in England. The film deals with the clash of those two cultures throughout, so we asked the pair to compare and contrast the English and American experience.

These are the best crime dramas on Netflix right now.

ShortList:You’ve both made movies in the UK and US – how do the sets differ?

Hugh Grant: "In America you tend to have a lot more money and time and food. They have a thing called craft services – it’s really greedy.
"You’re fed very well anyway, thrice of four times a day. But all day you can go and graze; there’s a great cornucopia of sweeties and biscuits and cakes and muffins. The result is you start a film fighting fit, and you end up unable to get into a widescreen shot. When I started you had to pay for your snack – a lady came round with a trolley and you had to give her 20p for a bun at 4pm.
"Also when I started in the ‘80s, at lunchtime, the whole crew went to the pub and got pissed. It was incredible. Then come back and lift heavy lights over your head. But it was considered very un-manly not to go and have three or four pints at lunchtime."
ShortList: Pubs play a big role in the movie – what do you both prefer, a British pub, or an American bar?
Matthew McConaughey: "I’m not a beer drinker so I like an American bar with a neon light and a great cocktail."
Hugh Grant: "I love a pub. I can’t go past a pub without popping in. I don’t like all this craft beer bollocks – it’s disgusting. When they say ‘We’ve got a local pale ale’ I say ‘Stick it up your arse'. I like old-fashioned bitter. Fuller’s do a good one – London Pride."
ShortList: Matthew – your character has a pickled egg with a beer at the start of The Gentlemen. Is that therefore something you wouldn’t have in real life?
Matthew McConaughey: "No I had two yesterday. Hugh had half."
ShortList: So you like a pickled egg?
Matthew McConaughey: "I don’t mind a pickled egg. I don’t wake up in the morning searching for one."
ShortList: A scene also plays out at a football match in the film. Matthew – you’re launching a team in Austin soon – how do you think Texans will respond to proper football?

Matthew McConaughey: "I think they’ll respond. You’ve got a team in Dallas and you’ve got a team in Houston. Youth soccer’s very strong in America. Austin in particular I think is going to respond with flying colours because we’re now an international destination.

"We’ve always been a university town, we’re the fastest growing city in the nation and there’s a large migration from cities all over the U.S. and internationally. A lot of those people didn’t go to school where I went to school at the University of Texas.
"They don’t have a team. We will be the only city where our only professional team is a soccer team, so I think Austin’s just ripe to have a soccer team. Or as you call it, a proper football team."
ShortList: The Gentlemen features a cruel joke at the expense of my hometown, Croydon. Have either of you been to Croydon?
Hugh Grant: "Yes, of course. I’ve gone bowling there. I used to have an agent – a very, very, very small, evil agent – who lived in Croydon and I used to go bowl with him and his children in those terrible shoes that a thousand other people have worn before you."
ShortList: Hugh, what’s your favourite American swear-word, and Matthew, what’s your favourite British curse word?
Matthew McConaughey: Mine’s easy because you don’t even use it that much as a swear word – cu...[you can guess the rest]. That’s a great one – the creativity with which you all use it is wonderful. Because it doesn’t really pass in America – no matter what ‘ly’ you put on the end of it, or what you add to it, those four letters still do not fly."
Hugh Grant: "I love Yiddish when I’ve made films in New York. What a great language that is. To be a schmegegge or a schmuck or a putz. I love them all."
The Gentlemen is released on January 1.