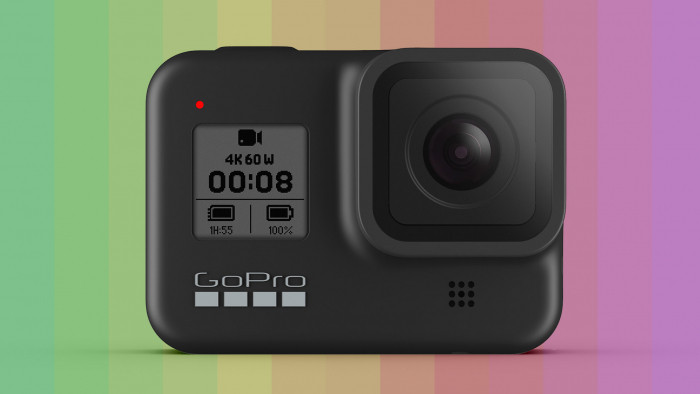 GoPro just released its latest top-end action camera, the GoPro Hero 8 Black. It may look a bit like the Hero 7 Black you know and love, but this is a different beast entirely.

You can pre-order one now, or wait until they go on sale on October 25.

Read on to find out what’s new in this latest action star. Highlights include a system of Mod add-ons, a slimmer design and better video-smoothing stabilisation.

Next, read our test of the best action cameras

It’s smoother than ever

Many think the key to an action camera is a wide-angle view but stabilisation is just as important. It stops your running, cycling and skiing footage from looking like a juddery, shaky mess. The GoPro Hero 8 Black takes the awesome Hypersmooth stabilisation from the Hero 7 Black and makes it even better with a Boost mode.

This is designed not just to get rid of shake, but to keep the view level with the horizon (added in the app), for the kind of look you’d normally need a gimbal to recreate. It’s a mini tech miracle.

Older GoPros need a special case to mount onto anything. The GoPro Hero 8 Black doesn’t, because it has built-in mounting “fingers”.

These cling to the bottom of the camera with magnets when not needed, and you just flip them out when you do need 'em. This means your GoPro kit takes up less space, and the Hero 8 Black will still hook onto any GoPro mount accessories you already own. There’s no downside here.

A multi-view approach is one of the highlights of a GoPro. You don’t just get one “action camera” style wide angle view of the world, but four. Narrow is similar to the field of view of your phone’s camera, Linear lets you fit more of the world in. There’s the standard action camera mode and, finally, our favourite extra, SuperView.

This zooms out even further. SuperView videos look larger than life, and embrace the world-distorting effect of the ultra-wide angle lens. It’s also indispensable if you need to mount your GoPro close when vlogging, but still want to see plenty of the world around you.

GoPro has seriously slimmed down the Black line. The Hero 8 Black is just 28.4mm thick. Factor in that you don’t need a mount case either and suddenly this camera seems much easier to carry around in a pocket.

GoPros have always been small, but the Hero 8 Black sets a new standard. You don’t lose out on toughness either. It’s water resistant to 10m, and GoPro says the glass lens covering is twice as strong this time around.

A new way to capture the moment

GoPro has added a great new mode to the Hero 8 Black, one that fits social media use perfectly. It’s called LiveBurst.

This captures a whole series of images 1.5 seconds before and 1.5 seconds after you hit the shutter button. You get a quick-to-share video that also doubles as a way to find the perfect still shot of a moment of action. Go into the phone app to hunt down that perfect frame.

The Hero 7 Black could live stream to FaceBook or YouTube at 720p, but GoPro has pushed that up to 1080p.

Given this is the resolution most people will see on their phones anyway, we’d call that pretty much perfect for a stream in 2019. All you need to do is setup a Wi-Fi hotspot on your phone and you can broadcast from anywhere that has decent mobile coverage.

You can add a screen, and more

The GoPro Hero 8 Black introduces a system called Mods. These are add-ons for your action camera, levelling it up.

There’s the Display Mod, which adds a front-facing screen so you can see what’s in-frame when shooting a video of yourself. It's perfect for aspiring YouTubers. The Light Mod is a 10-led light that provides illumination without the super-harsh shadows you get from a single source. And the Media Mod provides high-end mics for better quality 360-degree sound. The Media Mod also has slots to let you add the other two, to make a supremo vlogging tool.

Video quality is even better

We’ve seen the Hero 8 Black in action, and it makes some real improvements to the 4K video you can squeeze out of a pocket camera.

Colour looks warmer and richer in the 8-series, and there’s often more detail in your footage in lower light or when dealing with fast motion. The Hero 7 Black and Hero 8 Black both have 12-megapixel sensors, but that doesn’t mean they output exactly the same video quality.

GoPro didn’t just announce the one camera this October. We also got the GoPro Max, a 360-degree camera that you can also use just like a GoPro Hero 8 Black.

You get the same four views as the normal GoPro, plus 360-degree video and 270-degree instant panorama photos. This camera is a wee bit bigger than the Hero 8 Black, but it lets you do even more and only costs £100 extra.