A love letter to Caps Lock, the best key

WHERE WOULD WE BE WITHOUT IT? 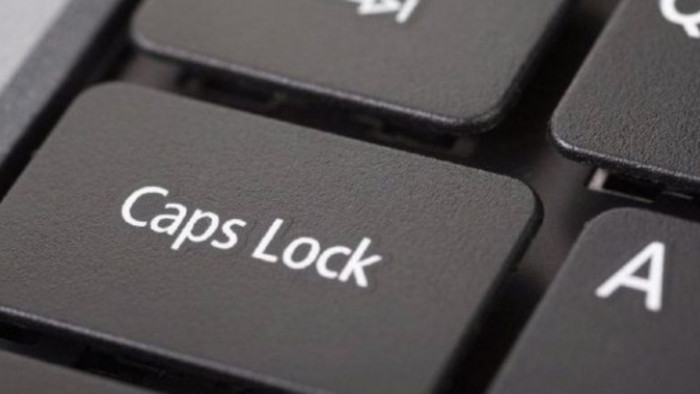 No key on a keyboard is more maligned than Caps Lock. There are keys that go forever untouched - nobody knows what Insert does, and nobody ever touched Break due to a weird feeling it might shut everything down, and there don’t need to be two Alts, and at least 40% of the Fs are redundant - but none that are as unfairly hated as Caps Lock. Nobody ever mentions it in a positive context. It’s only ever mentioned if you’ve accidentally typed a big load of stuff without looking at the screen, and had Caps Lock on because you’d just sent someone a message saying, like “BULLSHIT IDIOT!”, and then you look up and realise that what you’ve typed looks like a ransom note, and then you turn Caps Lock off and then hold Shift down and angrily type “I HATE CAPS LOCK”, which you ironically should turn Caps Lock on for.

It’s good though! Here’s why!

Back in the days of manual typewriters, Caps Lock was known as Shift Lock. Every typewriter key had two little letters on it - the lower-case and upper-case of each letter - and pressing Shift would physically lift the whole keyboard so it was the capital letter that his the inky ribbon. This involved quite a bit more effort than pressing a normal key, as it moved a lot of metal, so the Shift Lock key was developed to wedge it in place if you needed to type a lot of capitals. Otherwise your little finger would really be put through its paces.

The other thing Caps Lock avoids - usually at least (of which more later) - is accidentally typing capital numbers, which of course aren’t a thing. Angrily holding down Shift and typing stuff means the Shift applies to numbers and punctuation marks as well, so you end up typing things like I”M CLEVER< I”VE GOT !) GCSE”S AND % A_LEVELS

bY fREQUENTLY tRAPPING YOU, iT rEMINDS yOU tHAT yOU aRE aLIVE

It catches you out a lot, the old Caps Lock, doesn’t it? Imagine if you had a little device on your belt that kept track of how many times you raised your voice at people. The results would make for really interesting reading - we’re probably all a bit angrier than we entirely realise. Caps Lock is sort of like the internet version of that, just as writing in all-caps is thought of as shouting - every time you look up at your screen and realise you’ve written five paragraphs of nought but caps, you can take a moment and think about why you had Caps Lock on. Did you really need to be so aggressive? Was it absolutely necessary? Maybe you could have been more constructive and less confrontational than the IF THE EARTH WAS ROUND WE WOULD FALL OFF IT YOU STUPID ASS post you made, six hundred replies into a Facebook thread that started off about a dog.

We all know how to make text bold - highlight it and, depending on your operating system, press Ctrl+B or Command+B. Same with italicising and underlining - easy as anything. But if you want to make a whole load of upper-case text lower-case, or a load of lower-case text upper-case, highlighting it and pressing Caps Lock doesn’t do a motherfucking thing. We think we’re so special, don’t we, with our fancy telephones and futuristic computers, but until Tim Apple and Bill Microsoft integrate that feature, which everyone has tried many, many times despite knowing full well it doesn’t exist, we’re a long way from where we need to be.

iT kEEPS yOU oN yOUR tOES

If you move between computers a lot - maybe you have a laptop and a desktop, or you freelance and move between offices, or you lead a secret in-between life that nobody knows about and exists on a Lenovo - you will be familiar with the problem of punctuation marks moving around. The at sign, the hash symbol, the tilde and all their silly friends are sometimes found in totally different places depending on the keyboard, the operating system, the software you’re using and the settings. Adding Caps Lock into the mix can make what should be a really easy task all the more baffling, especially as sometimes, particularly on foreign computers, it can do that Shift Lock thing and turn numbers into what looks like cartoon swearing. Sending an emergency email home from a Ukrainian internet cafe, your heightened emotional state meaning you don’t check what you do, can result in a big string of greater-than symbols and asterisks instead of the bank details of your kidnappers. And stuff like that just keeps life interesting! DOESN’T IT?

MOST NEWSLETTERS ARE RUBBISH. OURS ISN'T