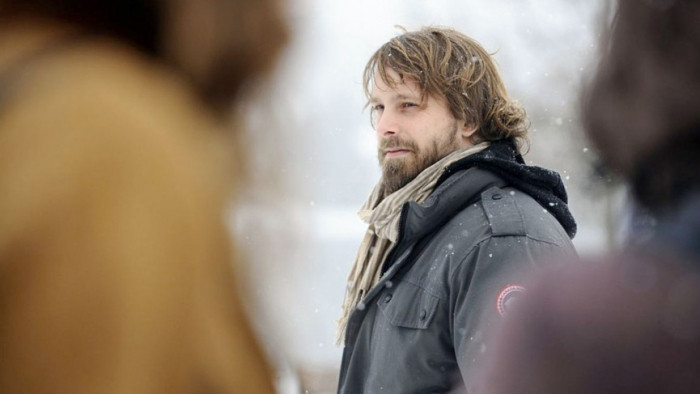 Aja’s next film was a remake of horror classic The Hills Have Eyes, which he followed with lots more genre fare, producing and directing the likes of Mirrors, Maniac, Horns, The Other Side of the Door, and Piranha 3D.
This summer Aja had a hit with creature feature Crawl, which Quentin Tarantino recently listed as one of his favourite films of 2019.
Set in Florida on the eve of a hurricane, the film stars Kaya Scodelario (Skins, The Maze Runner) as a swimmer who becomes trapped alongside her father in the crawl space under his home. As the water rises, a giant alligator enters the fray with dinner on his mind, and the pair face a race against time to survive. Crawl is available to buy on Blu-ray now and, to celebrate, we asked the horror helmer what scares him...

“Spiders are one of the most insane and fascinating creatures. Which is very unfair as most spiders are just living their life and not here to kill. But I have this problem.”
Aja is right about spider’s getting a bad press – while there are more than 40,000 species of spider on the planet, only a handful are dangerous, and less than 30 are deadly to humans. They include the funnel-web spider in Australia and the wandering spider in Brazil.

“I have a light phobia for roadkill birds. Not birds themselves but birds when they have been driven over by cars.”
Collisions with automobiles have contributed to the population decline of wolves in America and koalas and possums in Australia. In the UK, cars are the biggest single killer of badgers.

“Home invasion. I really have this thing where whenever I go in a place, I have to look under the bed and look in the closet to make sure there’s no one else in the place. It’s something that just stays with me. My work is sometimes having to imagine the worst thing that can happen, so I guess it has expanded to my personal life as well.”
Aja has made two home invasion movies. Switchblade Romance (which was called High Tension in his homeland France) featured an antagonist who attacks the two leads in a farmhouse, while his 2006 remake of The Hills Have Eyes has a family being terrorized by a gang of mutant cannibals.

“The last movie that went far and deep for me – which was a few years ago now – was Antichrist. That got me into a really dark place.”
Antichrist is a 2009 psychological thriller written and directed by Lars Von Trier. The film stars Willem Defoe and Charlotte Gainsbourg as a couple struggling to come to terms with the death of their child. Antichrist won Gainsbourg the Best Actress award at the Cannes Film Festival.
“My favourite scary movie is The Shining still. I just can watch it again and again – it feels like perfect music. It’s very dark but also a very funny movie. I love it a lot.”
Aja is referring to Stanley Kubrick’s 1980 adaptation of the Stephen King classic about a writer slowly going mad in a remote hotel. King himself turned the book into a TV mini-series in 1997, while a sequel entitled Doctor Sleep hit screens earlier this year.
“But I’m more scared about life than movies. When you become a parent, the fear of what can happen to the people you love is the strongest one.”
Crawl is available on DVD and Blu-ray now.