20 Things You (Probably) Didn't Know About The Office UK

Celebrating 20 years of Brent and co. 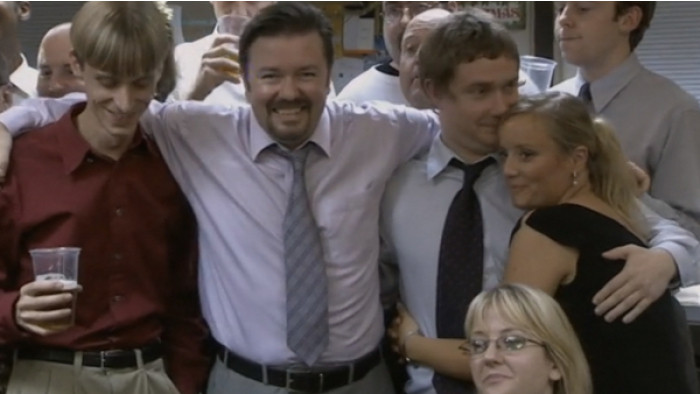 Following its first showing on 9 July 2001, The Office was nearly cancelled due to low ratings. 20 years later and it remains one of the greatest British comedies of all time.

Here, in tribute, are 20 things you (probably) didn't know about the show.

1. The Cat Stevens song Sitting was originally considered for the theme music.

2. The show has been sold by BBC Worldwide to 170 territories in 88 countries. It has been remade in eight, including France where a dubbed version didn't go down well but a French version was a huge success, thanks in no small part to main character of Gilles Triquet. It was called Le Bureau.

3.The Office was also completely remade for audiences in Chile, Afghanistan and Canada where the main character is called David Gervais, in homage to Ricky.

4. Originally Martin Freeman auditioned for the part of Gareth.

5. Gervais met Mackenzie Crook when they worked together on The 11 O’clock Show.

6. The record number of takes for one scene is 74. It's the one where Brent gives Tim an appraisal.

7. The first scene ever written was Brent's excruciating interview with Karen Roper for the job of PA, in episode five.

8. Brent was born from a character called 'Seedy Boss'. Gervais invented him in the spare hours whilst working at Xfm with Stephen Merchant in the late nineties. Merchant went on to work at the BBC and did a course for trainee TV producers. A practical element of the course was to produce a piece of work from a one-day video shoot. So Ricky and Steve got together to write and film a short documentary about the delusional and inadequate boss who they then christened David Brent. The seediness was reduced, but not eradicated.

9. Version one of The Office was filmed where Ricky used to work at the University of London Union on a Monday in June, when the senior staff were away. The office space had recently been done up in a generic open-plan style making a suitably anonymous backdrop.

10.The Office was the first British comedy in 25 years to be nominated for a Golden Globe, and the first ever to win one. It won won Best Television Series: Musical Or Comedy, beating Arrested Development, Monk, Sex and the City and Will & Grace. Gervais was also won Best Performance by an Actor in a Television Series: Musical or Comedy. He was stopped at customs when they spotted the gong in his luggage on the way back to the UK.

12. Gervais and Merchant had plans to tour the country and find "real people" to play the parts in order to add bags of authenticity to the documentary feel. "That was until we realised real people are terrible actors," said Merchant. "That's why they're not actors."

13. Gervais and Merchant are often asked if much of the show was improvised. "Actually it's 99.9% in the script." said Gervais. "The actors are just brilliant at making it look as though it's the first time they've said it."

14. Originally Steven and Ricky had a "strapping, squady type" of actor in mind for the role of Gareth. That was until Mackenzie Crook went for the role.

15. Gervais and Ewen MacIntosh, who plays Keith, cite the staff training episode as their single best in either series. Matthew Perry, who played Chandler in Friends, also describes the episode as "possibly the funniest thing I've ever seen in my life."

16. The caretaker that appears every now and then looking blankly at the camera is Stephen Merchant's dad, Ron Merchant.

17. As a small back story, Gervais and Merchant have said that the character of Brent worked his way up the ladder at Wernham Hogg, rather than landing the job of Regional Manager as his first role their.

18. Crossbow House in Slough, which is used as the exterior of the office in the opening credits, was demolished in 2013 (several fans of the show actually made pilgrimages to the site, including a journalist from the US), while Slough Bus Station, which also features in the title sequence, was replaced in 2011.

19. Gervais and Merchant cite Laurel and Hardy, This Is Spinal Tap, The Simpsons, The Larry Sanders Show and Whatever Happened To The Likely Lads as inspiration for their style of comedy.

20. The location used in which to film the show was a real disused office that happened to be part of Teddington Film Studios. For a while it was the production offices of Today With Des and Mel.