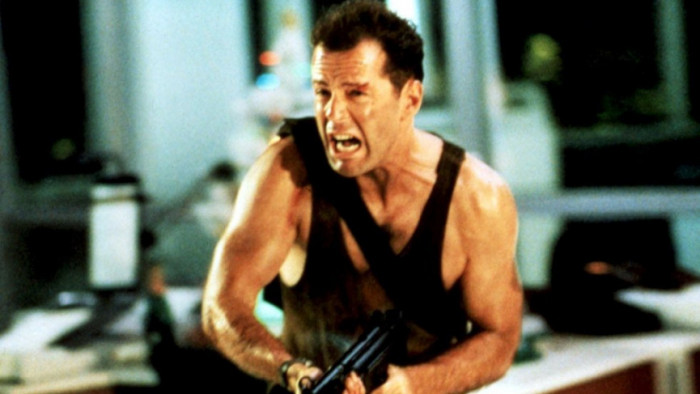 What does Christmas mean to you? Charity? Family? The Nakatomi Plaza? For us the climax of the year and the (granted, fictional) events at the LA skyscraper are inexorably linked.

That's right, Die Hard is a Christmas movie, perhaps the ultimate Christmas movie and, as sure as day follows night, John McClane will be on our screens some time over the Festive period.

Fox Plaza, a 35-storey, Los Angeles skyscraper stood in for the Nakatomi Plaza.

The building has also been the main setting for the rock & roll comedy Airheads, and the lobby is featured in the opening scene of Speed. Fox Plaza was also used as one of the buildings brought down at the end of Fight Club (pictured).

The building is also featured in Grand Theft Auto V as Weazel Plaza, a not so subtle dig at Fox.

The building was under construction during filming and many of the scenes that show it half-finished were filmed exactly as the building was.

Die Hard is based on Roderick Thorp's 1979 novel Nothing Lasts Forever, a sequel to his 1966 novel The Detective which had itself been turned into a 1968 film of the same name starring Frank Sinatra. That film was a box office success, and when Thorp wrote the sequel, the studio was contractually obliged to offer Sinatra the lead role despite being 73 years old at the time. Thankfully, Sinatra turned down the role.

The script was offered to a variety of action stars including Sylvester Stallone, Harrison Ford and Don Johnson, all of whom turned it down. Richard Gere, Clint Eastwood and Burt Reynolds are all also thought to have given the role the big thumbs down.

Die Hard was originally conceived as a sequel to sweaty gun-fest Commando, but when Arnie declined they, quite rightly, binned the idea.

Side note: How good is this image?

That's rhetorical question. It's too good for words.

Willis was largely known for his comedic role on Moonlighting, and the studio were somewhat panicky that he didn't have star appeal. The marketing campaign's initial billboards and posters reflected this, and Willis' face was anything but a focal point. Pee-po, Brucey!

Rickman himself was dropped 40 feet in the stunt required for Gruber's death scene. It's rumoured that the crew dropped Alan Rickman on the count of two when he was expecting a three count, to make him look even more surprised. In this lovely video Rickman admits he can't remember whether that was the case, but does say that due to the danger involved producers made sure it was the last scene Rickman shot. Fortunately they got it in one take.

In the original script, Die Hard took place over three days, but director John McTiernan was inspired to have it take place over a single night by Shakespeare's A Midsummer Night's Dream. That's sort of where the parallels between the two end, really.

A painted backing was wrapped around the 34th floor set to create the L.A. backdrop. It was 380 feet long and featured animated lights to create day and night effects. It’s still in Fox’s inventory and is sometimes used for other films.

The terrorists arrive in a truck that is green with a white top with "Pacific Courier" on the side (top). Ironically, "Pacific Courier" translates to mean "Bringer of Peace". "Atlantic Courier" (presumably a subsidiary?) was used in Die Hard: With A Vengeance (middle) in which Hans Gruber's brother is the villain. "Pacific Courier" also appears in Speed (bottom). The link between all three? Production designer Jackson De Govia.

In spring 1987 producer Joel Silver and director McTiernan attended a performance of the play Dangerous Liaisons, in which Alan Rickman played the evil Vicomte de Valmont. Immediately they knew they had found their Hans Gruber leading to Rickman's first first feature film role.

The DVD commentary reveals that the script did not originally feature the "Bill Clay" scene between McClane and Gruber in which Gruber pretends to be a hostage; it was only written in when it was discovered that Rickman could perform a brilliant American accent.

McTiernan wanted "exaggerated realism" in the muzzle flashes of the weaponry so blanks were specifically made for maximum visual impact. Special effects coordinator Al Di Sarro said: "In the world of blanks, there are loads that are not so loud and loads that are deafening. These were deafening." Rickman in particular struggled with the volume of the bang. Every time he would pull the trigger, he would flinch, so McTiernan tried to cut away each time Gruber shoots.

Amazingly the late great film critic, Roger Ebert, wasn't so keen on the film giving it just two stars. He really didn't like deputy police chief Dwayne T.Robinson saying: "All by himself he successfully undermines the last half of the movie."

Just goes to show, even the greats can be wrong, from time-to-time.

Takagi has a back story. He served on the Japanese navy ship, Akagi, which was the carrier that transported the bombers of Pearl Harbour in World War II. Hence "Akagi" is the password to the vault.

The scene in which McClane falls down a ventilation shaft and catches himself was an accident from an incident on set. A stuntman actually fell attempting to shoot the scene, and it was editor Frank Urioste‘s decision to incorporate the fall into the final film.

The scene in which a SWAT Greyhound knocks over a stair railing at the front of Fox Plaza required months of negotiations with Fox. The end helicopter scene took six months of preparation and the production was given only two hours in which to film it. It took three attempts, nine camera crews, and everyone within 500 feet of the line of flight had to be an employee.

Much of the script was improvised due to the constant screenplay tweaks that were being made during filming. Perhaps the best improvised line is Bruce Willis's "Hi Honey" at the end.

In the DVD commentary John McTiernan rather wonderfully says of the movie: “It’s okay to think this is ridiculous, because the storyteller thinks it’s ridiculous.”

The phrase “Die Hard” doesn't really translate in other countries, so it was retitled. In Spain it’s called The Crystal Jungle and in Poland it's called The Glass Trap.