Some unlikely facts about the 2002 Eminem film. 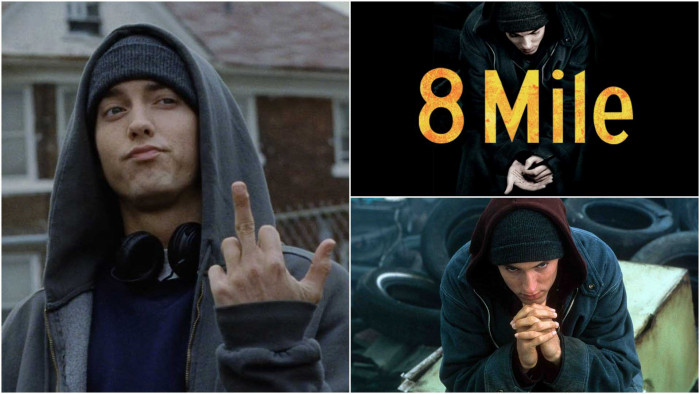 It's been nearly 20 years since Eminem starred in 8 Mile, a sideways take on the rapper's life. The movie is a fantastic look at hip-hop and its culture, showcasing how talent can rise from the myriad rap battles that take place in the US.

UPDATE: Seth Rogen has revealed that he once auditioned for 8 Mile but ended up not getting the part. He was reading for Cheddar Bob, Eminem's mate in the movie. The role eventually went to Evan Jones who nailed the part.

People were generally a bit sniffy when rapper Eminem decided he was going into movies, expecting something a bit Ja Rule or Vanilla Ice. But he showed them, with a critical hit, a box office smash and an Oscar.

How much do you know about 8 Mile? We were going to do a rhyme here but any attempt at rapping would have just been mortifying for everyone, so let’s just get on with the list shall we?

Eminem lost 24lb for the role.

Eminem was asked by director Curtis Hanson to dye his hair back to its natural brown. He didn't want people thinking he was just playing his stage persona.

Danny Boyle was in early discussions to direct but his vision for the film didn't match Eminem's as well as Curtis Hanson's did. Quentin Tarantino was also approached.

In the original script B-Rabbit worked at a hotel carrying rich people’s bags and had a lot of problems with his boss.

The title was only decided on at the end of filming. Before that it was only known as UDP: Untitled Detroit Project.

Lose Yourself was the first rap song to ever win an Academy Award. Eminem didn't show up to collect it because he thought he had no chance of winning.

7. Gary Sinise was almost in the movie

Gary Sinise was the first choice to play Greg, the boyfriend of Jimmy's mother (Kim Basinger). The role was won by Michael Shannon.

So busy was he during the time of production, the only time that Eminem could write the songs for the film was during breaks between scenes.

When the piece of paper on which Eminem wrote the lyrics to Lose Yourself was put up for auction it made over $10,000.

The film made a massive $51 million on its opening weekend. Its production budget was $41 million.

Along with Sons of Anarchy director Kurt Sutter, Eminem planned what Sutter called a metaphorical “continuation of the 8 Mile story”. In Southpaw, Eminem would have played a boxer who hit the big time but gradually lost his way. As 8 Mile was a reflection of Eminem’s early days, Southpaw was to be an echo of his struggles at the top. However, when Southpaw was eventually made in 2015, Antoine Fuqua was brought on as director and Jake Gyllenhaal, not Eminem, took the lead role.

Prints of the film were sent to cinemas labelled as The Mars Project.

13. First for The Falcon

Mekhi Phifer nearly passed on the movie because he was asked to fly to Detroit two days after the 9/11 attacks in New York.

The atmosphere in the rap battles was so intense and went on for so long that several extras passed out or threw up during filming.