This weird Nintendo DS rival could be magical

Cranking out the games 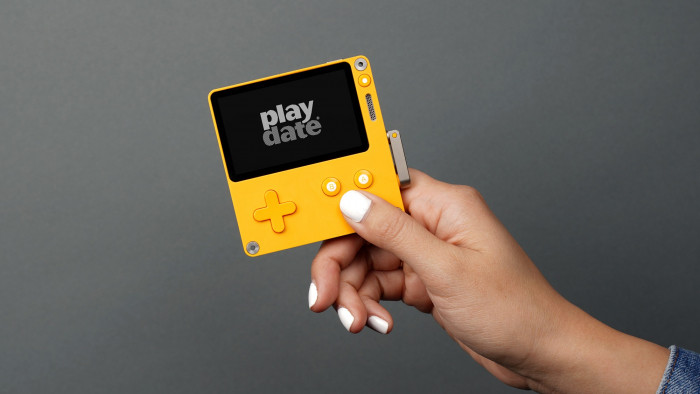 Outside of fishing lines and flagpoles, the crank doesn’t have many applications nowadays. Today Panic, the company behind indie delight Firewatch has announced its plans to change that with the weirdest gaming accessory since Donkey Konga persuaded us all that plastic bongos were a sound investment.

This is the Playdate:

Let’s start with that crank then. As well as a standard D-Pad and face buttons, the Playdate has a crank sticking out the side. Don’t worry: this isn’t to charge the thing. It’s actually a control method.

“Think of the crank like an analog stick — but one you can turn endlessly,” Panic writes in its FAQ. “It tucks into the device nicely and adds a new element to Playdate games that can’t be found anywhere else.”

Speaking of games, that’s another area where Playdate is a little unusual. Rather than picking and choosing what titles you want on it, you get them all bundled with it – revealed one per week like a slow-moving but very exciting Advent calendar. There will be 12 games in this first season, but there’s always the possibility of more if it’s a hit.

Those games won’t be FIFA or Call of Duty, which is kind of a pity as we’d love to try a crank-powered throw in. Rather, the 12 games will come from critically acclaimed indie developers like Bennett Foddy (QWOP), Shaun Inman (The Last Rocket) and Zach Gage (Really Bad Chess). “Some are short, some long, some are experimental, some traditional,” the company says. “All are fun.”

The first title comes from the unique mind of Keita Takahashi, the creator of Katamari Damacy. It seems to involve turning the crank back and forwards to make time move forwards and backwards.

About those games. We reached out to some of our favorite people, like @KeitaTakahash, @bfod, @helvetica, @shauninman, and many more.

You may notice the screen is black and white. That seems a bit weird in 2019, but it’s deliberate, giving the games “an aesthetic like no other.” The 400x240, 2.7-inch panel has “no grid lines, no blurring” and “is extremely sharp and clear,” the company says. “It’s truly a ‘premium’ black-and-white screen.”

Clearly this won’t be for everyone, but if this sounds up your alley, you’ll want to get to the Playdate site and register your interest, as it won’t be made in super-high quantities. It’ll cost $149 (around £118) and will be in buyers’ hands next year.