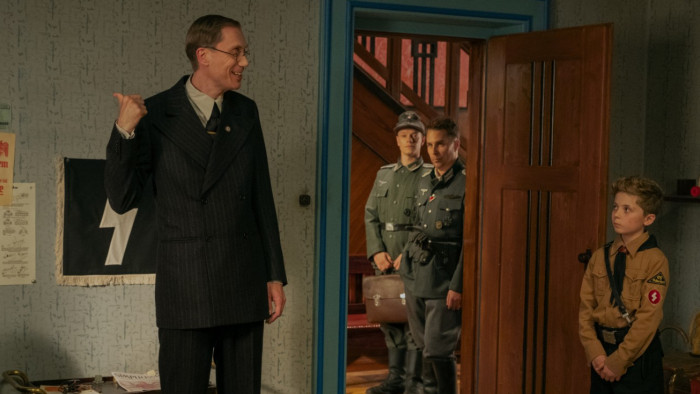 “Every British actor gets a call to play a Nazi at some point, so I was waiting for that day,” declares Stephen Merchant in a deadpan manner.

The role he’s referring to is that of gestapo agent Captain Deertz in the award-winning dark and satirical comedy JoJo Rabbit. Directed by Thor: Ragnarok and Hunt For The Wilderpeople creator, Taika Waititi, the audacious storyline centres around ten-year-old Johannes "Jojo" Betzler and his risible imaginary friend Hitler.

“It’s not often that you see that kind of thing done from major Hollywood studio,” Merchant declares of the film. “It just put me in mind of a lot of movies I loved growing up, you know? Life of Brian and Dr. Strangelove - using humour to tackle big ideas with black comedy and satire. I was kind of jealous though that I hadn't come up with the idea.”

Growing up in the midst of World War 2 Germany, a young JoJo finds his nationalistic ideologies challenged after his single mother, played by Scarlett Johansson, is found to be hiding a young Jewish girl their home.

It’s a sharp and witty satirical film, one that’s accompanied by more than a handful of wink-to-the-camera moments. Waititi’s take on an undeniably sensitive subject matter is bound to divide opinion, but it’s one that Merchant insists has been handled “immaculately” by the director.

“To me, as someone who comes from comedy, there's no subject that’s off limits really as long as you treat it smartly and respectfully,” he says. “You're not mocking the tragedy, you’re mocking the thought processes that led to it.”

“When I first read the script, it reminded me - I was always a big Marx Brothers fan - and there's this famous letter that Groucho Marx wrote to a Beverly Hills Country Club. His daughter had gone there for a birthday party with friends and because her father was famously Jewish, the club - that didn’t allow Jewish people in - had stopped her swimming in the pool.”

“She was very upset, and so he wrote a letter to the club in which he said, ‘I'd like to point out my daughter is actually only half Jewish - can she go into the pool up to her waist?’ And I think it’s such a magnificent way of dealing with that prejudice. Instead of getting angry, he's got to the very nub of the absurdity of it. He's pulled at the thread of anti-semitism and it all falls apart.”

It’s been nearly 15 years since Merchant and long-time creative collaborator Ricky Gervais masterminded The Office - a series that’s since become one of the best loved British comedies of our time. However, it appears that long before The Office’s conception (and that of the subsequent US version), Merchant had other - somewhat covert - aspirations.

“I never had imaginary friends when I was younger, but I did write a lot of stories and comic books which I think was my own way of living some fantasy life,” he declares.

“They were often kind of James Bond rip-offs where I was clearly having great pleasure imagining myself as a super-spy. I tried to draw Young Frankenstein once - the Mel Brooks film - and Fawlty Towers. It probably was my way of understanding comedy and somehow wanting to be part of it.

“It's funny really the way that James Bond, when you're growing up, seems cool. And then when you get older, you're like, this guy's a sociopath. Making quips just after you’ve killed a man or while he’s literally making love to a woman.

"I always imagine if you worked in an office with James Bond, he's the guy you wouldn't want to invite to the barbecue - cracking bad jokes and hitting on all the women.”

Has time quelled his desire to strike out as a secret agent? Well, if it hasn’t, then his towering 6-foot-7 frame just might put a spanner in the works, given that MI5 stipulate males must be no taller than 5-foot-11 in order to apply.

“I still think it would be fun to be to play James Bond, but I'm really rooting for Q I think. I feel when Ben Whishaw gets tired of it, I'd like to put my hat in the ring. 'Pay attention double-oh-seven!' he declares in the sternest of Q-inspired voices.

It goes without saying that we’re pretty chuffed he didn’t find himself on an alternate career path - particularly given the all-around funny man has shared some of his top-tips for creating a successful comedy.

So, without further ado, these are Stephen Merchant’s titbits of advice for all those aspiring writers out there.

1. Don’t be a people pleaser

“I think that's really wise, because the more you attempt to reach every person, the harder it becomes. There's always going be someone that doesn't like it. So write for yourself, write for your friends or write just because it's not there and you wish it was. That seems far better than thinking ‘what people want?’

“I love music and I really enjoyed Bruce Springsteen's autobiography. One of the things he talks about a lot is that he worked hard. You know? He just fucking did the work. He put the hours in, he learned his craft, he toured around when he was a kid, he plugging away in crappy bars and learnt the skill. Writing and writing and throwing it away and refining it.”

“To me, that’s what it takes. You have to put the hours in, put the work in - you just get better that way and you learn that way. And so, I don't feel there's shortcuts to that really. You’ve got to do your time in one way or another. Making those comic books in a room when I was a kid, instead of going out to the many parties I’m sure I was invited to taught me something, I think.”

3. Write about what you know

“I think there's a great deal of truth in writing about what you know. It’s a piece of standard advice but it's very true - at least when you're starting out. Your unique experience is all you have in a way.”

“What happens is that, like with The Office, it seems so specific to Slough and to English life and yet it's sort of universally enjoyed. Somehow the more specific we were, the more universal it became, weirdly, which seems counter intuitive really.”

“There's another famous writing phrase, you know, which is variously ‘kill your babies’ or ‘kill your darlings’. I think that's always very true.”

“You write stuff and you fall so in love with what you've done or something that you've written or some scene, that you just think: ‘this is dynamite!’. And the truth is, the script doesn't need it. The project doesn't need it. It's slowing things down or it's self-indulgent or it’s going off on a tangent. And however much you love it, you've got to get rid of it. Yeah, kill your babies - that's always true.”

“I think what's great now is if you're trying to get into my business, it's so easy to actually make something. You can shoot it on your phone, you can get your mates involved, you can edit it on your laptop. And I'm sure if Ricky and I were starting out now, we would have been all over YouTube.”

“When I was growing up it was a nightmare. You couldn't get hold of camera equipment. The Office got made because we made a little sort-of demo tape - but that was with a proper camera crew whilst I was working at the BBC. Whereas now, I'm sure we’d have shot it ourselves on our phones or something. So I think putting stuff out there, doing it yourself, bringing it to life in that way, it’s a great tip."