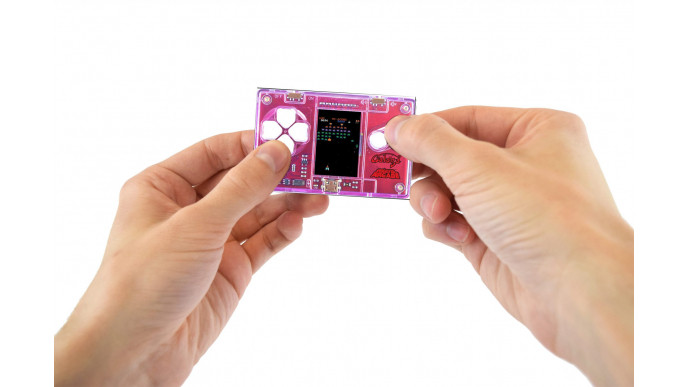 What is the best video game ever made? Every few months a potential contender to the throne comes out, only to be replaced by a better, bigger, flashier sequel. In 1996, for instance, millions of people would happily place their hands on their hearts and state that there would never be a better game made than Duke Nukem 3D. When Grand Theft Auto III came out it seemed unimprovable, and you can play it on a phone now, and it’s fine, but later instalments in the series have knocked it into a cocked hat.

Old-ass games though, that first generation of ultra-simple, ultra-compelling ones, endure year after year, unaffected by trends or novelty, reliant solely on their gameplay rather than some flashy new graphics breakthrough or gimmicky accoutrements.

Thats why we’re really excited by these MicroArcade machines, wallet-friendly, credit-card-sized one-game arcade machines, the kind of thing train delays, broken lifts and unexpected nights in Turkish prisons are made for.

The usual instinct when bored is to grab one’s phone, but then you end up doing kind of nothing for ages, doing a hundred different kinds of nothing. Checking some networks. Putting things on some of them. Checking them again. Reading three different sites’ similar interpretations of the same news. Putting something about that news on a social network of some kind. Reading a hundred peoples’ status after doing so.

Isn’t there something kind of thrilling about the idea of reaching instead for a machine that only does one thing? Imagine spending ninety minutes in one go playing Pac-Man. It would be the best day you’d had in years – pushing actual buttons rather than on-screen impressions of buttons, making measurable progress rather than assuming that if you put enough rude jokes on Twitter someone at Netflix would give you a job.

Look at these beauties:

These will be available later this year, going for $20-25 in the States and probably £20-25 here because the pound is in freefall. No stockists have yet been announced, but they look like the sort of thing Urban Outfitters puts by the till for impulse purchases while you buy a big jumper. Let’s all get ‘em and feel brilliant.