OnePlus 8 review: 5 things to know about this 5G handset

It hasn't got the Pro's spec boost but this is still a fantastic phone. 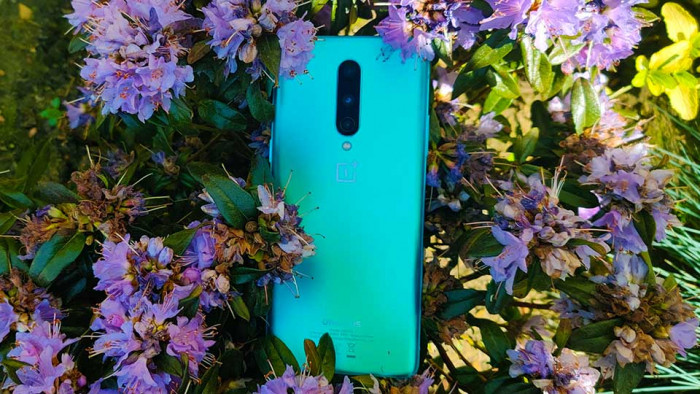 The OnePlus 8 is the phone that you expect OnePlus to release. That’s not damning it with faint praise, more congratulating OnePlus on being able to stay true to its ‘premium features, fair price’ mantra.

While its bigger brethren, the feature-rich OnePlus Pro, pushes the company away from its roots, with its premium price and features set to tear Samsung a new one, the OnePlus 8 isn’t a shouty phone but is one of the best-value 5G phones you can get right now.

It’s a handset that cherry picks the best of the OnePlus 8 Pro (its screen, albeit at a slightly lower Hz range) and leaves behind what it doesn’t need (the weird color lens) to create a phone that proves that the mid-range is the place where the real innovation in the phone world is happening at the moment.

1. The design is fantastic

Those hoping for a screen completely free from a camera notch will be disappointed. Where the OnePlus 7T Pro used a pop-up camera, the OnePlus 8 has the front-facing camera in the screen. It has even ditched the OnePlus 7T’s waterdrop camera for this, instead using a punch-hole camera. It’s small and you almost don’t notice it, but it is a slight blemish on what is an impeccable screen.

Size-wise, it’s 6.55 inches with the smallest of bezels on the top and bottom of the device. Like the OnePlus 7T Pro, the screen has a great contour and flip it around and you have the choice of either an Interstellar Glow or Glacial Green paint job.

We have the latter and it’s a great look, perhaps the best paint job we've seen on a phone - it’s matte glass on the back for a start, which makes it stand out.

2. It Hz that the screen is this good

sniffed at. Essentially, you are getting what the 7T Pro was offering and then some.

You still get the benefits of no judder, fast scrolling between apps and the like, and - whisper it - we didn’t notice a huge amount of difference between the two screens.

Brightness is a decent 1,100 nits and worked well in the sun we’ve been getting recently. We watched a number of Netflix shows through the device and the 20:9 aspect ratio is great for movies, while the HDR 10+ compatibility means the contrast ratios are spot on. Couple this Dolby Atmos sound and you have a really good media device.

3. The cameras are a compromise

Where the OnePlus 8 Pro sports four cameras, there’s only three on the back of the OnePlus 8. They are: an ultra wide 16MP, a 48MP main camera and a 2MP macro lens. That’s right, if you are looking to zoom, then you will have to do it digitally on the OnePlus 8.

This is great news if you want to take a lot of macro shots, but if you are looking to become a twitcher then this isn’t the phone for you.

The photos we did take with it were crisp, though, and the low-light shooting impressed us. But in a world that is packed with superzoom cameras, it is strange that OnePlus opted not to even try and compete with the OnePlus 8.

We were impressed with the ultra-wide shots, but the OnePlus 8 does seem to tone down the colours a little when compared to other ultra-wide cameras around. This is more a matter of taste rather than quality, however.

As for the front-facing camera, the images were fine. The subject, however, was not thanks to weeks of unruly lockdown hair and unkempt stubble.

The power in the OnePlus 8, for its price, is fantastic. There’s a Qualcomm 865 Snapdragon chip on board, the same that’s in the OnePlus 8 Pro and this is backed by either 8GB of RAM and 128GB storage or 12GB and 256GB storage - we reviewed the latter and was constantly impressed.

There’s serious grunt when playing games, a smoothness in flipping through various apps and screens. Dare we say it (again): we didn’t notice much of a difference between this phone and the muscle-bound OnePlus 8 Pro when it came to its performance.

5. The battery is living its best life

Battery life is immense, too. It doesn’t quite have the might of the Pro’s 4,510 mAh battery, but it does come packing a 4,300mAh battery. This is larger than the OnePlus 7T’s 3,800mAh battery and in our time with the phone, we never worried that we were going to run out of juice.

We are a bit irked that the wireless charging functionality has been omitted from the OnePlus 8, although you do get Warp Charging which means you can go from 1% to around 60% in half an hour, which is fantastic and, frankly, a bit scary.

Yes, it's a touch more expensive than the OnePlus phones we've seen before but you certainly get a lot of phone for the money. The money in this instance is £599 for the 8GB, 128GB version and £699 for the 12GB, 256GB version.

It may not have the four-cameras of the OnePlus 8 Pro, or quite the cutting-edge screen technology but we didn't really miss either of these.

The OnePlus 8 is the purest OnePlus Android phone yet, with the new software making sure that those who love Android will get the most out of the software. It's speedy, with looks to die for and it's fantastic fun to use.

We were hoping that the camera would offer up better results and wireless charging would be on board, but these are minor niggles compared to the many (One)plus points that the phone offers.