Festive songs that you're not already sick of hearing. 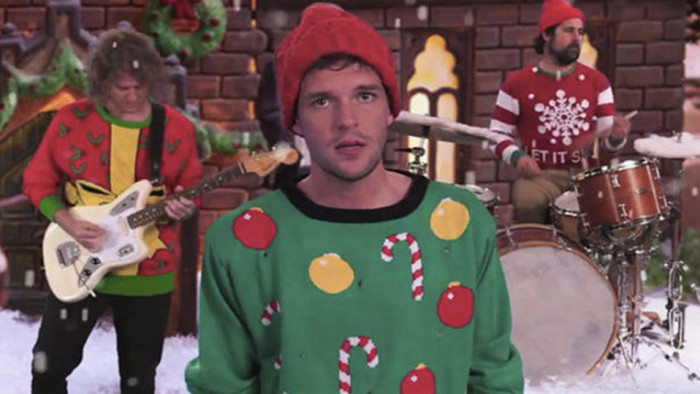 We know how you’re feeling at the moment. At this very second you’re probably weeping into your clammy hands.

The reason? You’re listening to ‘Merry Xmas Everybody’ for the 46th time this week. Not through choice, of course, but thanks to the cruel and repetitive nature of the Christmas albums blasting from every speaker possible.

To combat these December blues, we’ve put together a list of less - well - awful songs that will get you in the Christmas mood without turning your stomach.

Read on for 12 quality tracks: one for each day of Christmas.

Want more Xmas tunes? These are the best Christmas songs as voted for by you.

Let’s face it, the East 17 original is one of the greatest festive songs ever - who’d have thought the Walthamstow boys would ever be capable of such an emotional festive ballad when they were larking about in the ’House Of Love’ video? So Northampton electro shoegaze artist Maps was already working with excellent material when he embarked upon this cover and he managed to make it even more epic with washes of synths and a glacial ending. Majestic.

Christmas is a time for giving, don't you know, and in 1999, indie rockers Low gifted their fans with a 8-track festive album which kicked off with this track. It's a remarkably addictive pop song which manages to use sleigh bells in a non-annoying way, which is an achievement in itself.

Julian Casablancas - ‘I Wish It Was Christmas Today’

Strokes frontman Julian Casablancas made the slightly odd decision to cover this gloriously impatient song which was originally part of a Saturday Night Live skit back in 2000. He turned it from a novelty song into the Strokesiest Christmas track you've ever heard.

Another cover here of a 60s song that's been used in both Gremlins and Goodfellas and covered by U2, Mariah Carey, R.E.M. and many, many others. But the one which truly turned a familar track into something entirely new came from Death Cab for Cutie. And yes, we realise it's more depressing than the original.

The young millennial answer to Mariah Carey, Ariana Grande’s 2014 single is packed with jingle bells in the background, high notes and a ridiculously catchy chorus you’ll find yourself humming absentmindedly. It’s the perfect alternative to ‘All I Want For Christmas Is You’, only the video has nothing on the original diva’s festive home-movie style –pint-sized Ariana has thankfully improved her lip-syncing these days.

Sufjan Stevens - ‘That Was The Worst Christmas Ever’

Although the title suggests something ear-gratingly comedic, this is actually a rather sad and tender song about a family warring over the Christmas period. Depending on your personal family dynamic, this will either get you in the mood for your own holiday period or it will depress you a tad.

The Wombats - ‘Is This Christmas?’

Funny, sentimental and with some proper pop-punk energy, the Wombats' festive track documents what really happens every Christmas time: arguments, old films and sleet. But as the song's outro shows, we wouldn't have it any other way. If that wasn't enough, it features a brass band and Les Dennis in the video. What more do you want?

Every year since 2006, The Killers have released an annual Christmas song in aid of Product Red. Yet unlike a lot of other charity singles, they've all been a bit great. We opted to include this one, the first and the best, which is the Christmasiest of them all.

Another slice of festive hip hop here all the way from 1987. It's also another example of sleigh bells being used for good rather than evil. It's produced by Rick Rubin, aka that guy who's produced every other song you've ever liked, and while it's full of Christmas references, it's deserving of a play at any time of the year.

OK, we’re stretching the definition of ‘alt’ a little here, but now following Jepsen’s rather brilliant album E.Mo.Tion, which saw her co-write with the likes of Blood Orange’s Dev Hynes, we think that just about gives her enough indie cred to make the list. Like ‘Stay Another Day’, Wham’s festive classic is a deceptively simple-yet-brilliant piece of writing, which can’t really be damaged by anyone - and Jeppo gives it a contemporary electronic flourish along with her distinctively breathy vocals.

An unusual cover which takes a track from country singer Jim Reeves from 1961 and manages to make it cooler yet also more Christmassy. The lyrics are sad and the ending is rather tragic, providing a perfect antidote to pretty much every other Christmas song.

Best Coast & Wavves - ‘Got Something For You’

The best Christmas songs can come from the unlikeliest of places. Take this short but sweet duet from Best Coast and Wavves which was recorded for a Target Christmas album, that’s a not traditionally cool superstore in the US for those not in the know. Ironically, it’s probably the most hipster-friendly track on our list.