20 Things You (Probably) Didn't Know About The Matrix 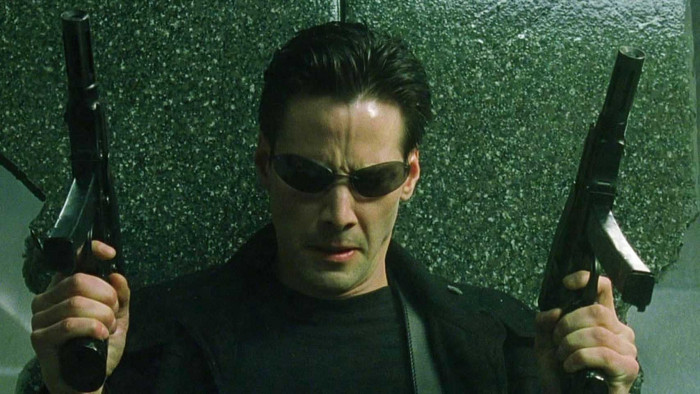 The Matrix is still one of the greatest sci-fi movies ever made. Yes, it's responsible for a whole barrage of poorly orchestrated rip-offs, misusing the wonderfully innovative bullet time technology, but you can't blame the poor Wachowskis for that.

Now, that we know that The Matrix 4 is officially going to be called The Matrix: Resurrections, it's time to celebrate the original movie.

How much do you know about the 1999 mega-hit? Head down the rabbit hole with us and find out...

1. Janet Jackson was approached to play the role of Trinity but turned it down because the scheduling clashed with her tour. As a massive sci-fi fan she was very upset about it.

2. Johnny Depp was the Wachowskis' first choice to play Neo, but Warner Bros. pushed them to use Keanu Reeves (after Will Smith, Nicolas Cage, Brad Pitt and Val Kilmer had all turned it down)

3. The cast and many of the crew were expected to be able to explain all the philosophy in the film. The Wachowskis insisted that Reeves read Simulacra and Simulation, Out of Control and Evolutionary Psychology before reading the script.

4. Keanu Reeves underwent back surgery just before he started working on the film. A fusion of his spine had caused the beginnings of paralysis in his legs. Reeves was still recovering when fight training started and he couldn't kick for the first two months.

6. In order to win Warner Bros' confidence, the Wachowskis, who had only directed the low-budget Bound, had comic book artists Steve Skroce and Geof Darrow draw up a 600-page shot-by-shot comic book/storyboard for the film. Impressed, Warner Bros. then agreed to a $63 million budget.

7. The rooftop set used in the opening sequence was left over from the 1998 movie Dark City.

8. Gary Oldman and Samuel L. Jackson were considered for the role of Morpheus, played by Laurence Fishburne.

10. The studio got edgy when the Wachowskis started running behind schedule. To appease them the directors sent over a polished up version of the opening sequence; then the studio left them alone. The shoot was originally schedule for 90 days but ran for 118.

11. The scenes in the construct were so heavily lit that the actors couldn't see the join between the walls and the floor. Editor Zach Staenberg described is as a bizarre experience having "no sense of the ground beneath your feet".

12. Carrie-Ann Moss had to train for six months to be able to do all the fight sequences herself. On her final day the Wachowskis presented Moss, who was previously completely unknown, with a champagne bottle inscribed with, "Congratulations, now you're an action hero".

13. The subway fight scene with Neo and Agent Smith went ten days over its shooting schedule.

14. For the scenes in which Neo wakes up in the robot pod Keanu Reeves lost 15lb and shaved his entire body, including his eyebrows.

17. The moment when Neo vomits after leaving the Matrix for the first time was apparently not acting. The story from the set was that Keanu Reeves ate a chicken pot pie that didn't agree with him.

18. Morpheus' rooftop rescue took over six months to plan and set up.

19. All the street names in the movie are taken from actual streets in Chicago, where the Wachowskis grew up.

20. Hugo Weaving based the voice of Agent Smith on the deep tones of his directors.