15 Things You (Probably) Didn't Know About Ferris Bueller's Day Off 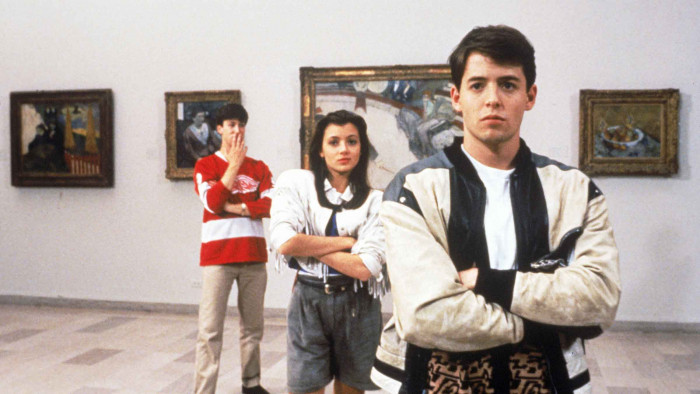 Bueller?... Bueller?... Bueller? You know him, obviously. He's the hero of John Hughes' teen comedy classic about a boy who fakes sickness and then has the best day of his life, and the best and worst of his best friend's. But how much do you know about him?

Here are 15 facts about Ferris Bueller's Day Off that you may or may not know. Don't worry, there's no test later.

1. Alan Ruck had auditioned for the role of Bender in The Breakfast Club and Hughes remembered him when casting Cameron Frye. However, the role was first offered to Emilio Estevez.

2. Because the final scene was filmed in autumn but set in spring, the crew had to spray paint all the yellowing leaves green.

3. Lyman Ward and Cindy Pickett, who played Ferris’ parents, were dating during the production of the movie. They married later that year and were together until 1992.

5. Alan Ruck was 29 years old when he played Cameron Frye.

6. Matthew Broderick and Jennifer Grey, who play siblings in the movie, were later engaged in real life. Broderick is now married to Sarah Jessica Parker and Grey to Clark Gregg, aka Agents of S.H.I.E.L.D.’s Agent Coulsen.

7. Ferris originally had younger siblings but they were cut from the film. You can still see evidence of them, like the children's paintings on the fridge in the kitchen.

8. The 1961 Ferrari GT California that the kids destroy is now one of the most valuable car models. One sold at auction in 2008 for just under $11 million.

9. Ben Stein, who plays Ferris’ economics teacher, was not a professional actor but an acquaintance of Hughes who was chosen for his flat voice.

10. Molly Ringwald wanted the role of Sloan, which went to Mia Sara, but John Hughes wouldn’t let her have it because the part was too small.

11. A prequel spin-off TV series was aired, with Jennifer Aniston playing Ferris’ sister Jeanie. It was cancelled after 13 episodes.

12. Many of the car license plates in the movie are references to John Hughes films: VCTN (National Lampoon’s Vacation) on Katie’s car; TBC (The Breakfast Club) on Jeannie’s car; MMOM (Mr. Mom) on Tom’s; 4FBDO (Ferris Bueller’s Day Off) on Rooney’s.

13. Several people seen dancing in the parade weren't actually employed by the production. Some of them, including the construction worker and window washer, were just members of the public who started dancing to the music and amused John Hughes so much that he filmed them.

14. In the original version of the script the character of Sloane was called Tandy.