This is what you should be watching, right here, right now. 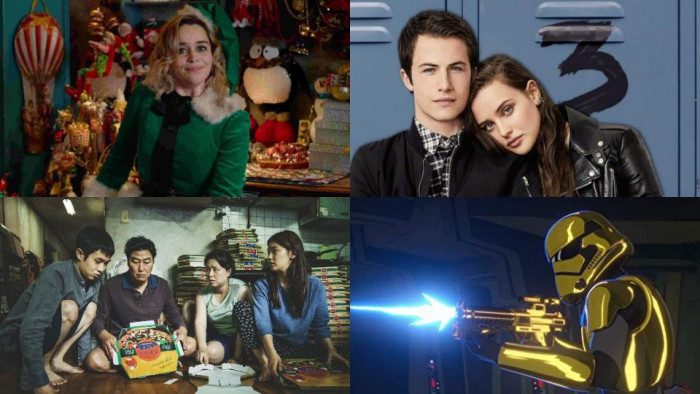 It’s been a busy week on the trailer front, with the release of everything from seasonal offerings to a little bit of bloodlust. The promo for the festive Last Christmas hit our screens, featuring a soundtrack inspired by the late, great George Michael, whilst the impressive trailer for the forthcoming Netflix Original show The Dark Crystal: Age Of Resistance showed just what could be achieved with meticulous attention to detail. 13 Reasons Why also made a dramatic return in a classic case of whodunnit, whilst Star Wars Resistance announced it was the beginning of the end.

Oh, and let’s not forget Parasite, the film that well and truly stole the show at Cannes. It’s a dark comedy that comes complete with a slathering of blood and plenty of tension.

The controversial show centred around teen suicide has returned for a third season - with the accompanying trailer providing more questions than we have answers. Continuing on from the death of Bryce Walker in season two, the montage focuses on the potential suspects. We see Justin (Brandon Flynn) facing a police interrogation, Tony (Christian Navarro) and Clay (Dylan Minnette) looking concerned (nothing new there) and a host of the show’s central characters in various confrontations with Bryce prior his untimely death. It’s most definitely a case of whodunit.

Teasing the appearance of Kylo Ren and Captain Phasma, the new Star Wars Resistance trailer for the second (and sadly the final) season of the Disney show. Depicting the aftermath of The Last Jedi, the trailer exposes the desperate situation The Resistance find themselves in as they attempt to escape from The First Order. Needless to say, the words “don't miss the epic conclusion" emblazoned across the screen hint at the show’s sad demise. It’s been short and sweet Kylo.

Hot off the back of it’s Palme d’Or win, Bong Joon-ho’s Parasite has become something of a cinematic sensation. The black comedy’s trailer focuses on a family who are living in poverty but get a lucky break when their son, Woo-sik Choi, is handed the opportunity to become an English tutor for a wealthy family. After faking his qualifications (and wangling his equally unqualified sister a job as their art tutor), things soon take a dark and mysterious turn, with jump cuts that culminate in blood splattering ominously across pieces of white bread.

It may be a little early to get into the Christmas spirit, but this seasonal George Michael-inspired rom-com looks to be the present we never actually asked for. Directed by Paul Feig, Last Christmas features a host of stars, notably fan favourites Emma Thomson, Emilia Clarke and Henry Goulding, in a film that’s uniquely scripted to the soundtrack of the Wham! legend. It may sound like a novelty, but remember, you’ve gotta have faith.

5. The Dark Crystal: Age Of Resistance

To put it plainly, the full-length trailer for The Dark Crystal: Age Of Resistance is, quite frankly, beautiful. The prequel to Jim Henson’s 80s muppet hit, The Dark Crystal, the attention to detail seen in this Netflix Original trailer elevates this show to a whole new level. Featuring voiceovers from a host of stars, including Mark Hamill, Taron Egerton and Helena Bonham Carter to name but a few, the full show is set to be released on the platform on August 30.