The '80s music legend on great songs and gaming. 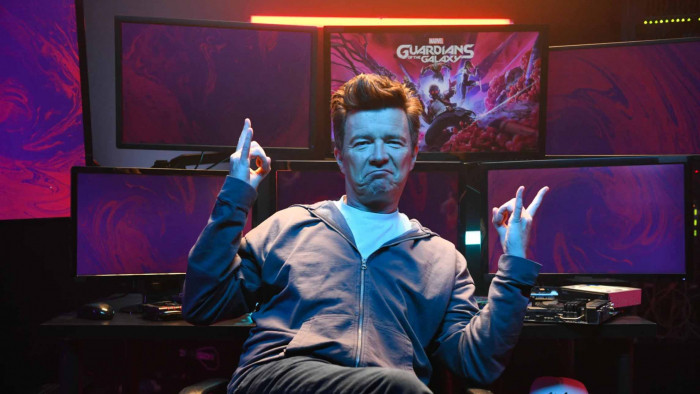 There are three things you might not know about Rick Astley:

1. He holds the record as the artist who has played the most consecutive shows in the Manchester Arena (most of those were as the support to Peter Kay in 2010).

2. He has said that Vic Reeves’ impersonation of him is a highlight of his life

3. He’s now an integral part of the Marvel universe, as his track is a big part of the huge new blockbuster video game, Marvel’s Guardians of the Galaxy.

When we sit down with the music icon, it’s in aid of the latter: ‘Never Gonna Give You Up’ is part of the storming ‘80s soundtrack to Marvel’s new AAA third-person action adventure game out this week, which is earning top reviews across the board for its pacey plot, rompy action and fun-filled combat.

About to reach a whole new audience of fans - again - the track which sparked the rick-rolling phenomenon and reached one billion Youtube views this year, is, fittingly, not gonna be given up by listeners around the world any time soon. We ask Rick Astley why he thinks it’s endured for so long.

“There's enough distance away from it now that we can say, yep, it's really cheesy - but nobody gives a shit whether it's cheesy or not! It just sounded great. Stock Aitken Waterman, who produced it, knew what they were doing. But there also must have been some fairy dust in the studio that day - because if you could do it every time, you would.”

“The video also had a massive part to play in it,” reflects Astley, on one of the most viewed music videos of all time - even if a substantial number of those were unwarranted, “Especially in America, because MTV was so huge there. People were seeing it as this really weird concoction of it being a number one record around the world, but being sung by this kid who looked like he was 11 and should be in middle school. When younger people see that video now, I'm not sure what they think, but it does look almost otherworldly, or from another time.”

“The weirdest thing for me is when I see people wearing a blazer and a striped shirt now, and they're not even being ironic,” adds Astley.

Naturally, we had a simple question for the hitmaker. Which enduring songs make him feel that way, too?

So, here are the five tracks Rick Astley is Never Gonna Give Up…

Marvel’s Guardians of the Galaxy is available to purchase now for console and PC. Watch the video of Rick Astley Rickrolling gamers below.

“This is tricky, because I could choose anything by Foo Fighters, but I will say “Everlong”, because it's a monster. I'm gonna get technically boring now, but it’s in a detuned guitar technique where you tape one of the strings down, and when you do that, it instantly makes you feel differently.”

2. Biffy Clyro -Many of Horror

“Ironically, another song that does that detuning is my next choice, Many of Horror. The first time I heard it, I was driving up Kingston Hill on my way home and the song came on the radio. I pulled over and cried. I went home and bought it on iTunes, and went straight into my studio at home, and I probably played it 20 times. I've never done that before in my life. I found out who the producer was, and I emailed him to tell him it had just brought me to my knees. It’s breathtaking.”

3. Luther Vandross - Never Too Much

4. Crowded House - Don't Dream It's Over

“Crowded House are the band I've seen most in my life, and the song Don't Dream It's Over is my wife and I’s song. The words are inscribed in the ring she got me. I'm getting emotional now.”

“I’ve seen them at all kinds of venues, and they really don't take themselves too seriously, even though Neil Finn is definitely regarded as one of the greatest songwriters of the last 25 years. I saw that at Hammersmith once, and the drummer had to leave to go to the toilet. Everyone switched round: Neil Finn gets on the drums, the bass player gets on the guitar, the keyboard player jumps on the bass, and they just stop jamming. Then the drummer comes back like, ‘What’s going on?’ and Neils like, ‘You had your chance!’. Every time you see them you think tonight will be serious - but they’ll play something that’s really intense and pulls on the heartstrings, and then take the piss right after.”

“I learned to play drums to Highway To Hell. I'm a drummer really. I know I sing, but my ultimate dream would have been to be a drummer. Sometimes at our shows now, I jump on the drums and we play Highway To Hell. Funnily enough - I’m name dropping now - when I met Dave Grohl for the first time a few years ago, we were talking about drumming, and he said that that record is what he sat his daughter in front of to learn to play the drums, too. From him, that’s a serious thing!”

“Before Mutt Lange produced the Highway To Hell album, AC/DC were an amazing, great rock band. But that album on, they were a fucking machine. My dad had a little garden centre, and the first time I heard it, I was about 14 or 15 and listening to the radio in my dad's pickup truck at the garden centre. Tommy Vance hosted The Rock Show on Radio 1, and he said, this record is so good I'm just gonna play the whole album - strap in! I listened to that record, sat in my dad’s pickup truck at the garden centre, and I was like: I’m in.”