The co-star of Emily chats exclusively to ShortList. 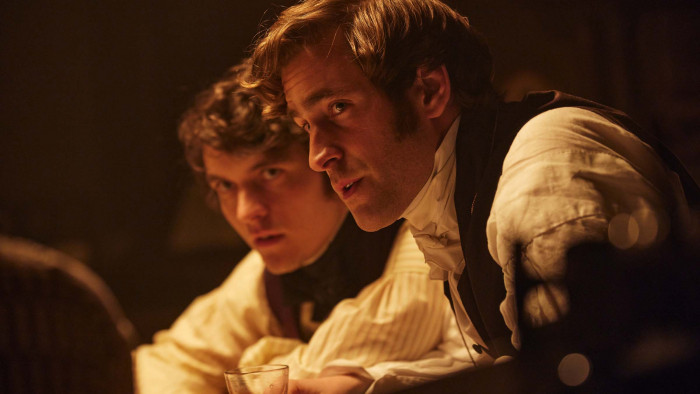 Emily isn't a biopic of Emily Brontë but a fantastical re-telling of her life. Much like the Brontë sister it is based on (a breathtaking performance by Emma Mackey), it has its own unconventional beat that manages to portray the author of Wuthering Heights through the lens of the book, mapping plotlines with her life - all exquisitely shot handheld.

It has it all, like the novel: sex, romance and a good dollop of the gothic, with its portrayal of the moors that make up what's now famously known as Brontë Country and a frankly scary scene with a mask.

"It takes you by surprise, doesn't it?," says Oliver Jackson-Cohen about that particular scene, when we caught up with him London.

He plays the real-life William Weightman in Emily; a man who has devoted his life to god but can't help fall for Emily Brontë (it's thought in real life, it was Anne Brontë he actually fell for).

Jackson-Cohen definitely knows scary. Before Emily, he is best known perhaps for his terrifying take on the title character of The Invisible Man, starring alongside Elisabeth Moss as the abusive, presumed-dead husband.

Then there's his roles in Mike Flanagan's spooky The Haunting franchise and a stint as Jonathan Harker in the NBC production of Dracula - all of which are a far cry from the initial pureness that seems to emanate from Weightman.

"Gothic horror keeps following me wherever I go," laughs Jackson-Cohen. "But I think horror is something we are all interested in. There's a darkness we all want to explore and in Emily it's this scene with the mask, which is an ode to Wuthering Heights."

Emily was shot in Yorkshire, on the moors, which was somewhere Jackson-Cohen hadn't visited before. Once he arrived on 'set' though, he was impressed with what he saw.

"To go from base to the parsonage, where we actually shot a lot of the movie, was like a 40-minute drive through the moors," he remembers. "It was in the middle of nowhere. Just to be out in that landscape, with the wind and the rain, is honestly like nothing I have ever experienced.

"It's something Frances [O'Connor, Emily's director] captures really well in the movie, too," he continues. "Being there definitely really helped - I don't think you could get that with green screen."

For Jackson-Cohen and the rest of the cast, their trip to the moors ended up being an extended stay.

Not that you would know it watching the movie, but Emily is a film that was shot in lockdown. Conditions, co-star Oliver Jackson-Cohen thinks, that make it rather special.

"I feel like all of these projects that have been shot during what was a really tricky time will forever hold this quite special thing," says Jackson-Cohen.

For him, lockdown meant staying on location with the cast for six weeks, in the same house much like the Brontë Sisters did back in the 1800s. It made for quite the experience.

"It was incredibly important that we all be together," he says, "because there was this camaraderie and this ease of being together which we all still have to this day."

The Weight of the world

"I'm not religious at all but I spoke to some priests, spiritual people and pastors. Even though we only see him do a couple of sermons [in the movie], that was the crux for me - the security that people feel with faith," notes Jackson-Cohen.

Even with this prep, the character didn't click until director Frances O'Connor mentioned a key trait for Weightman.

"We had two weeks of prep and she said to me, 'nothing bad has ever happened to Weightman until he moves here'.

"That was such an incredible jumping off point for the spiral of where he goes and where this relationship with Emily takes him."

Emily is in cinemas from 14th October