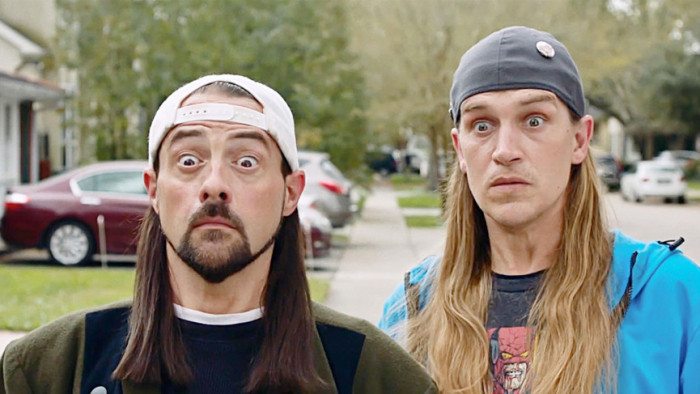 By Hanna Flint
19 December 2019
It’s been 25 years since Jay & Silent Bob burst their way onto the movie scene and now they’re back for another adventure.

Writer-actor-director Kevin Smith reunites with Jason Mewes in Jay & Silent Bob Reboot (in cinemas now) as the weed-loving bffs must try and stop a movie based on their comic book alter-egos, Bluntman & Chronic, from being made against their will.

If you think this sounds exactly like the plot of the 2001 movie Jay & Silent Bob Strike Back then you would be right, as Smith has described this new instalment as "literally the same f**king movie all over again," with plenty of stars from his View Askewniverse like Jason Lee, Brian O'Halloran, Ben Affleck and Matt Damon reprising past roles.

So to celebrate the Jay & Silent Bob’s return to the silver screen here are some of their best moments from the last quarter-century with a few of Jason Mewes’ favourite too.

“You know this is one of my favourite scenes because it made me laugh so much on the day,” Jason Mewes tells Shortlist of this moment in Jay And Silent Bob Strike Back.
“I’m going to Sean William Scott in the van, ‘if you were a sheep would you f**k a sheep?’ and it took us ages to do it because every time we did, I laughed. We had to shoot that scene maybe ten times!” - Watch the clip now.

Released in 1994, Clerks was Smith’s directorial debut and has long been considered a cult classic. It follows two shop assistants and their misdemeanours during one workday but it’s Smith’s alter-ego Silent Bob and Jason Mewes’ Jay that steal pretty much every scene in the low-budget, black and white comedy.
While Bob is obviously a man of few words, Jay has far too many and it’s in Clerks that he establishes himself as the foul-mouthed, sex-crazed, blunt-loving drug dealer we know and love. However, now and then Jay proves himself to be quite the sage able to dish out good advice, in this case, to Dante (Brian O'Halloran) when he’s having girl drama.
“I dunno dude, that Caitlin chick's nice, but I've seen that Veronica girl doing shit for you all the time,” Jay says, “I saw her rubbing your back, f**king comes and brings you food. Didn't I see her change your tire once?”
Listen to the man, Dante.

When fallen angels Loki (Matt Damon) and Bartleby (Ben Affleck) find a loophole in dogmatic law to return to heaven it’s up to Bethany (Linda Fiorentino), the last scion of Christ to stop them and the end of times. However, Bethany can’t do along and must team up with two prophets to help her on this quest.
Can you guess who these two prophets turn out to be? Yep, Jay and Silent Bob to the rescue, literally, when Bethany is attacked by three skater-boy demons outside her work. “SNOOTCH TO THE MOTHER F**KIN’ NOOTCH,” Jay cries as he and Bob jump in and beat these plaid-wearing beasts and force them to retreat. Bob lights a cigarette and Jay shouts, “Go back to your paper round, you Might Duck fucks.”
Some heroes don’t wear capes, some say fuck a lot. - Watch the clip now.

A running joke in Mallrats is Silent Bob’s desperate attempt to do the Jedi mind trick after watching Star Wars: Episodes 5 and 6 the previous weekend. After several failed attempts he seemingly succeeds when trying to reach the videotape that would out Shannon (Affleck) as a sex pest. Actually, the tape gets knocked into Bob’s hands because of Will jolting the stage in despair because he can’t figure out the magic eye picture.
“The Jedi mind trick! Holy shit, motherfuckin' Yoda and shit!” Jay exclaims.
“Adventure, excitement,” Silent Bob says, finally breaking his silence. “A Jedi craves not these things.”
No one tell him, ok?

You soon realise with Smith’s movies that they often find a way to show how bad men can be in relationships. Clerks, Mallrats and of course Chasing Amy which sees Affleck’s comic book writer Holden fall in love with Joey Lauren Adams’ comic book artist Alyssa who happens to be a lesbian.
Silent Bob rarely speaks but when he does, it counts, and in this movie he delivers a poignant monologue about how toxic he was towards his ex, Amy, because he found out she had previously had threesomes.
Funnily enough, this movie is based on Smith’s own tortured relationship with Adams and it seems he used it as a way to apologise to her by pointing out how toxic he (Holden/Silent Bob) was towards her (Alyssa/Amy).

Jay and Silent Bob really know how to make an entrance and in Jay & Silent Bob Strike Back they are on top form. We first heard Jay sing a version of this rap in Clerks, but in the 2004 film, he delivers a more hilarious rendition outside the Quick Stop before segueing into “Jungle Love” by Morris Day and the Time.
The scene also features a brilliant nod to the fact that all these movies exist inside one universe, the View Askewniverse as Jay says Jungle Love was “written by god herself,” which is a reference to Dogma and Alanis Morissette who plays God in it.
Awomen.

“From Clerks II I definitely dig the speech where I'm like, ‘Man, I could have been somebody why not me?” Mewes says of his previous outing as Jay.
The speech he’s referring to goes a little something like this: “You know, sometimes I wish I did a little more with my life instead of hanging out in front of places selling weed and shit. Like, maybe be an animal doctor. Why not me? I like seals and shit. Or maybe an astronaut. Yeah. Like, be the first motherfucker to see a new galaxy, or find a new alien lifeform... and fuck it. And people'd be like, "There he goes. Homeboy fucked a Martian once."
“I also loved the big dance sequence,” Mewes adds. “That was a lot of fun.”

8 “We fought these renegade angels”

In the latest movie, Kevin Smith’s daughter Harley Quinn Smith stars as Jay’s love-child Millie and Mewes says a favourite scene transcends the script.
“My favourite scene from this movie is definitely at the end is when Jay’s telling Millie, ‘hey this one-time, Silent Bob and I went to the mall, then we fought these renegade angels and the church got mad at us and then we went to Hollywood,’” Mewes says.
“It made me tear up because I realised it was sort of meta. It wasn’t just Jay telling Millie about his and Silent Bob’s adventures but also Jason Mewes telling Kevin Smith’s daughter about her father’s movie adventures too.”