The Darkness frontman gets all festive in this exclusive interview. 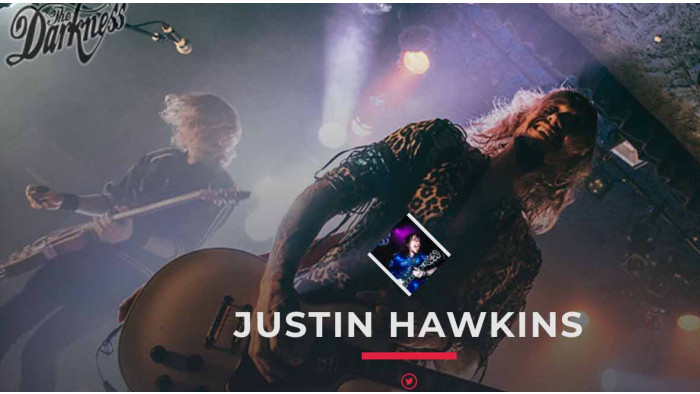 By Rebecca May
14 December 2019
The Darkness, The Pogues and Mariah Carey’s Christmas songs all have something in common. Not only have they soundtracked untold Christmas party smooches, spats and sausage roll buffets, but they all also were kept off the coveted Christmas Number One spot in the UK charts, instead all holding the honour of being Christmas Number Twos.
But, only one of those festive anthems achieved the accolade of smuggling in ‘bellend’ to our Christmas music vernacular. And it wasn’t Mariah.
The sleigh bells and seventies guitar of The Darkness’s glam, hard rock anthem ‘Christmas Time (Don’t Let The Bells End) has found itself replayed every December. But the very best way to hear it this month is live. Rip off your shirt and don your skin-tight leather trousers, because excitingly, The Darkness are on tour right now, showing off their critically acclaimed new 2019 album, ‘Easter Is Cancelled’ as well as a set of their most iconic, spandex-clad hits from across their near twenty-year history.
Lead singer and guitarist of The Darkness, Justin Hawkins, tells us how it feels to play their iconic Christmas song to crowds of merry fans during the festive season: “It's a moment of genuine euphoria. Everyone's got their hands up in the air, people sing… and halfway through the big solo in that song, there's a key change, and it goes up a tone, so the last bit is actually very difficult to sing. But the crowd sings it perfectly every time.”
“It's really exciting,” Hawkins tells us, “It's a great moment for us as a band, and I think everybody in the room enjoys it. It’s Christmas time, and everyone's singing - that's what it's all about isn't it?”
So with that in mind, Justin Hawkins, glam icon, is here to reveal his own five favourite Christmas songs for Shortlist. And they might surprise you.
“You were expecting Wham, Slade and Wizzard, weren’t you?” he asks Shortlist.
His playlist is not as glam rock as you might expect from the glam rock legend.

“But they're still glamorous,” he tells us, “Anything with Christmas in the title is glamorous by default. It’s immediately shiny, glittery, wrapped in tinsel, wearing it like a shiny boa.”

The Darkness are currently touring the UK in support of their new album Easter Is Cancelled. More info and tickets at Thedarknesslive.com.

“It’s got an uncharacteristically introverted vocal from James Brown, and you don't necessarily recognise it as him at first. It feels like the spirit of Christmas has made him reflect on his life from a different point of view. And then, it’s got a really important message: let the underprivileged children enjoy Christmas first. I think we can all get behind that: It's easy to treat Christmas as a commercial enterprise. And I think what James is saying here is, it's not that. It's a time of magic and wonder, and it’s for the children. So, make sure that the ones that are less well off, get their presents first. That’s a beautiful sentiment.”

by The Blind Boys of Alabama featuring Tom Waits (2003)
“I like anything with Tom Waits, anyway, and if you're going to listen to anybody describing Christmas, it should be him. It's biblical, and it's soulful. It doesn't sound that Christmassy, but it's beautiful. Not everything has to have a sleigh bell all the way through it. I've come to realise that now.”

by William Bell (1967)
“This one is the least Christmassy of my choices. There are some songs that are Christmas songs, but they're reluctant Christmas songs, and this is one. It does talk about Christmas, but it’s more of a time frame, or background, for a love story, as opposed to the whole purpose of the thing. But it's a beautiful song, so everybody wins! I was actually turned on to that by an Irish guy yesterday. A random guy came up to me and said I should look it up. I think he was drunk. I think he thought I was somebody else as well.”

4. ‘I Believe in Father Christmas’

by Greg Lake (1975)
“This one isn't a reluctant Christmas song at all. It’s saying he's rejecting the religious stuff and going full-on the other way. It's a metaphor really, he's saying that he believes in the concept of allowing children to have this, the imagery and the iconography and all those wonderful things, to look forward to: Trees, gifts, a red-faced man coming into their room at night without nefarious purposes. And that man is out before they're awake, with any luck. And then he's gone, like he was never there. No finger prints or anything. I don't know how he does it.”

“Here’s a little secret: You might not be aware of this, but I was pretty hangover when we recorded it.
“We recorded the song with Bob Ezrin, who is the producer of Pink Floyd's ‘The Wall’, and Alice Cooper's ‘School’s Out’, and we chose him because he's really good with chromatic percussion, he makes brilliant sounding records, and he's also brilliant at rustling children and getting them to do singing.
“For me, it's one of the best-sounding things we've ever recorded, because we did it in Abbey Road, and we had kids and bells, and all that stuff. After the first day of recording, we went off and we had to go and collect some awards at an awards thing. Then, we came back with our award two days later, completely hungover, and recorded the B side. In the meantime, Bob Ezrin had finished the whole song, having done all the bells and recorded the kids while we weren't there, and already gone home.
“When we came back, we were so hungover, that Ed, our drummer - who was always a purist, to his credit, and didn't like loops and samples - I remember, he played a loop once and then just sampled it, because he was too hungover to play the whole song. So, that’s how you know it was a bad hangover.
“But it felt like being part of the 1960s hit factory. It was a really special time. I think you can hear that in the recording, can't you? Everything's going right.
I think it's everybody's favourite Christmas song, really. It'd be a crime not to put it on here. Plus I'm here to promote the band, so it had to get on this list. I'm a professional.”