Exclusive: We speak to the celebrated director about his latest film. 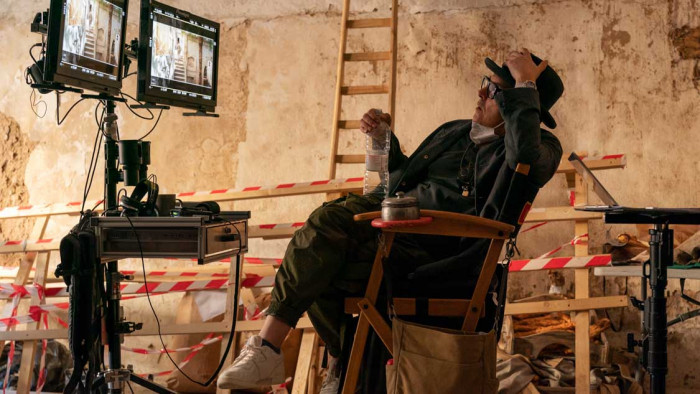 Joe Wright is a director who is no stranger to adaptations, having previously made movie versions of Pride And Prejudice, Atonement and Peter Pan.

But his latest film is an altogether different adaptation - it's of the stage play Cyrano, which is itself an adaptation of the famed Cyrano De Bergerac story.

It's a bold retelling of the age-old love story brought to life with sweeping shots, beautifully woven songs (from The National's Aaron and Bryce Dessner) and stellar performances by joint leads Peter Dinklage and Haley Bennett.

We sat down to chat to Wright recently about what it was like making his first-ever musical and how he has changed as a filmmaker since his movie directing debut some 17 years ago...

ShortList: Tell us why you wanted to adapt the Cyrano De Bergerac story?

Joe Wright: I’ve loved the original Roxanne play for many years. I saw the Gerard Depardieu version when I was a teenager and was a big fan of it.

I couldn't see any point in redoing it until I saw Peter Dinklage and Haley Bennett play Cyrano and Roxanne [on stage] respectively. I was just kind of shocked by the emotional authenticity and power of those two performances.

And it seemed to me that a Cyrano without the nose made it all the more immediate and relevant on a personal level.

SL: The music is an essential part of the film, and obviously the stage play. Were you a fan of The National before seeing the play and how did you change up the arrangements for the movie?

JW: I was a fan of them, yeah. The stage version is very different from the movie. A lot of the songs that work on stage just wouldn't work on a movie so we had new songs written and we retooled others. We developed the songs in parallel with the actual screenplay for a number of years, really.
SL: We love that Peter has got a similar baritone to The National's Matt Berninger as well.

SL: Why do you think the tale of Cyrano still resonates today, some 125 years after it was written?

JW: I think we've all experienced a sense of not feeling good enough, not feeling worthy of the person we love. And that's really all the story is. It's a story about that fear and that kind of fear of intimacy. And then it's structured perfectly. This incredibly solid structure is something that we maintained and has endured throughout that 125 year history.
SL: There are some fantastic shots in the movie. Tell us a bit about how you choreographed the film - and Cyrano’s fight scenes in particular.
JW: The fight that happens on the stairs is a single shot and I felt that it was important that we really sold the idea that Cyrano is capable of great acts of physical bravery, but incapable of simply telling Roxanne that he loves her. There is a kind of terrible paradox there and therein lies the tragedy.
That fight was rehearsed for many weeks prior to shooting and we were lucky enough to work with an amazing stunt choreographer, Eunice Huthart, who is a bit of a hero of mine. It was a very challenging sequence for Pete and for the Italian stunt team and for the units - we went through many, many, many, many takes - but I think it was well worth the pain.

SL: Even though Peter Dinklage was in Game of Thrones, he didn’t have a huge amount of that kind of action. So it was great to see him get right in the thick of it.

SL: Peter and Haley Bennett were in the original stage play. How easy was it for you to get them to transition how they acted on stage for the screen?

JW: I think they probably turned up thinking, ‘alright, we've done this before, we know what we’re doing’. But there is a process, I always ask for a three-week rehearsal process prior to shooting and during that we tried to get them, in a sense, to unlearn everything that they had learned before. To kind of deconstruct those performances and then rebuild them.
There’s a certain plausibility that you can get away with on stage that you can’t on film, and I think that one of the wonderful things that Haley Bennett managed to do was to give this character who is often, you know, fairly gullible really, give her an intelligence and depth and a full sort of emotional dimensionality. Her Roxanne is a powerful, intelligent woman rather than this kind of gullible, lovesick girl.

SL: When it comes to the singing in the movie, how did you approach that? Was it done live or was a mixture of redoing it afterwards in post production?

JW: All the singing was recorded live on camera. That was something that we felt very passionately about. I'm always sort of slightly thrown out of musicals, when there's that transition from speech to singing and suddenly we end up in this declamatory perfect world. So I wanted a much more naturalistic style of singing and I wanted to be able to move from speech and singing almost, you know, like when you're washing up and you find yourself singing along to the radio. I wanted it to be that intimate and that natural. And so to that end, we recorded all the singing live.
The actors had little earwig headphones and they would be speaking and then they would hear the music start in their ear, and then they would sing to what they heard.
There was an editing process of choosing the best takes and trying to fit, but I wanted to embrace the faults in their voices. Luckily, they're very, very good singers but at points their voices crack or they run out of breath, or the emotion overcomes the ability to hold a pure note. And I felt that those kinds of faults, if you want to call them that, were where the emotion lay and would actually express the humanity of the characters.

SL: Musicals are having a resurgence at the moment. Why do you think there is a renewed appetite for the genre?

JW: We are living through fairly difficult challenging times. Even prior to the pandemic politically things were quite unsettling, with certain heads of state being in position, and I think that the musical form allows us a level of escapism, which is a good thing. Saying that, I'm not sure that I really have the answer. I live my life and respond to circumstances and I make the films that I want to see at any given time.
SL: How do you think you've changed as a filmmaker since your first movie Pride and Prejudice?
JW: I'm a better craftsman now than I was back then. I was 33 when I made Pride and Prejudice and I just turned 50, so I would like to think my worldview has deepened and evolved.
I know that I've taken some kind of little detours that were possibly unfruitful but I feel like I know the films I want to make now. And I'm not embarrassed by who I am - I don't have a need to seem cool anymore. I’m also probably less arrogant than I was.
The films [I make] are an expression of my life. There's no separation between my emotional and spiritual journey, and my professional creative journey. They are the same thing. So making films allows me to develop as a person and so it's difficult to kind of separate the craft from everything else.
[Laughing] Wow, that’s all a bit heavy, innit?

Cyrano is in cinemas from 25 February, courtesy of Universal Pictures.