Best Liverpool hotels: from the ultra stylish to The Beatles themed

Liverpool is buzzing. Jürgen Klopp is driving Liverpool FC on to reach footballing heights once more and the enduring musical legacy of the Beatles is highlighted by the reopening of Strawberry Field.

The ferry still crosses the Mersey every day, allowing passengers to look back on iconic structures, such as the Grade I-listed Royal Liver Building.

Have a favourite Liverpool hotel? Give it an upvote, or leave a suggestion for future additions to this round-up below. 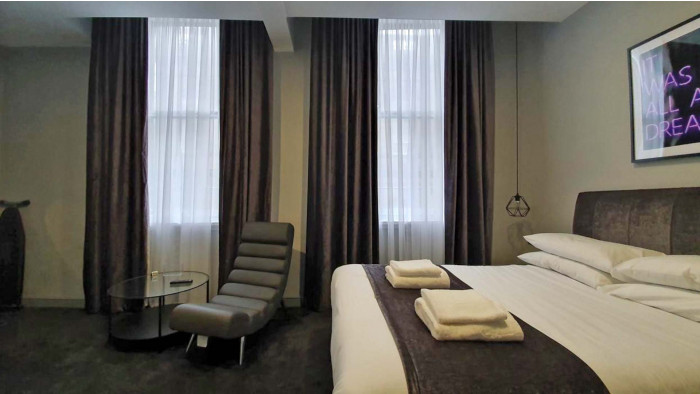 Rooms from £59
Book now at Booking.com

Urbanista is among Liverpool’s newest hotels – it opened in late November 2019. The Ropewalks district where it sits is one of the city’s coolest areas for cafes, bars, restaurants and venues. There’s a design-led vibe to the setup and a mix of rooms features doubles, kings, a quad for four and two suites (Secret Garden and Wild Corner) that sleep up to six and have access to a private courtyard. 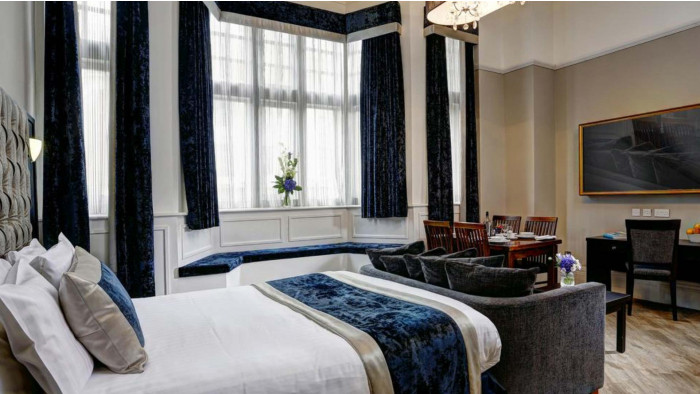 Rooms from £53
Book now at Booking.com

The Grade II-listed exterior of this building, previously home to the Merseytravel business, is matched by classy interiors, especially in the dramatic-looking (and top-notch) R restaurant and bar. Rooms range from twins and doubles to suites, all with the decor turned up to the max – and large TVs, too. The Richmond’s masterstroke is that it’s an apartment-hotel, so you can make yourself at home in rooms that feature a sofa, dining table and kitchen. Five minutes’ walk from Lime Street station, the Richmond is close to the World Museum and Walker Art Gallery. 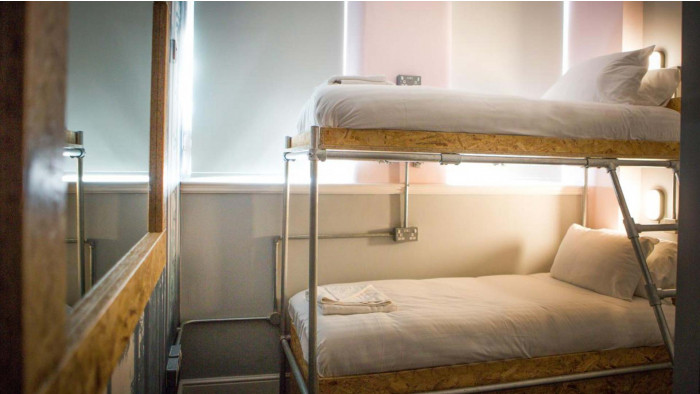 Rooms from £34
Book now at Booking.com

Dispense with notions you may have of down-at-heel city hostels, this 96-room property (five minutes’ walk from the Cavern Club) is smart, friendly and kitted-out with traveller essentials. There are twin, double and family rooms with private facilities, plus four-, six-, eight- and 10-bed dormitories. There’s a games room and lounge, movie area, kitchens, and laundry. Perhaps best of all, though, is its restaurant, Love Thy Neighbour, where breakfast, brunch and dinner dishes arrive Instagram-ready. It even serves up vegan afternoon tea. 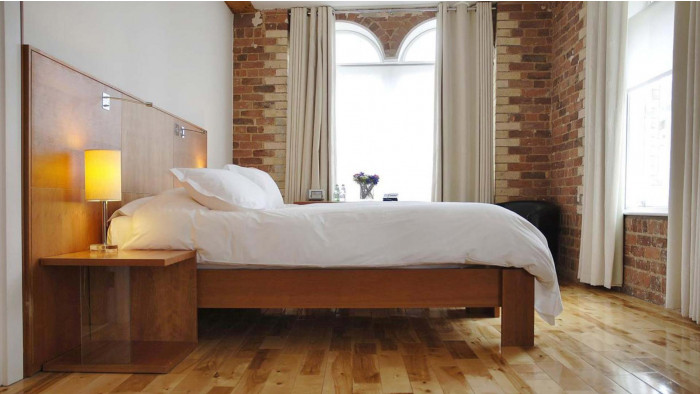 This award-winning boutique hotel in Liverpool’s Georgian Quarter has been a favourite since it opened in 2004. A converted Victorian-era warehouse, its interior and rooms reflect its history with beams, exposed brick walls and iron pillars. It’s close to the city’s cathedrals and the waterfront attractions. It’s only going to get bigger and better – with development plans (completed by summer) to add an indoor swimming pool, spa and cinema. 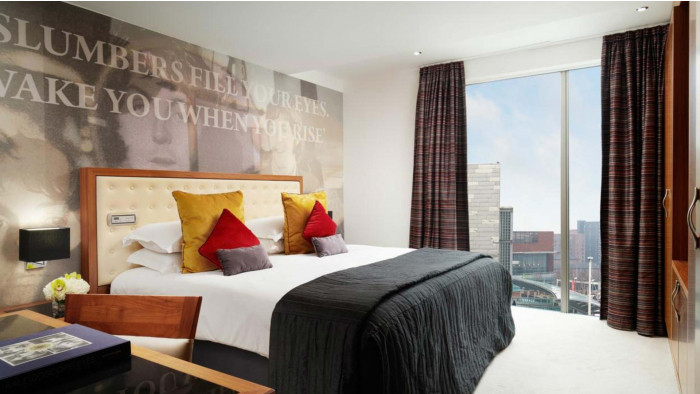 Rooms from £99
Book now at Booking.com

Billing itself as the world’s only Beatles-inspired hotel, this 110-room property in the stellar Grade II-listed Central Buildings is adjacent to the Cavern Club itself. Pretty much everything – rooms, restaurant, bar, live lounge – gets a Fab Four twist (and shout) and there are even two suites: one named Lennon, the other McCartney. Rooms feature Hypnos beds, smart TVs, free Wi-Fi, and Beatles artwork. 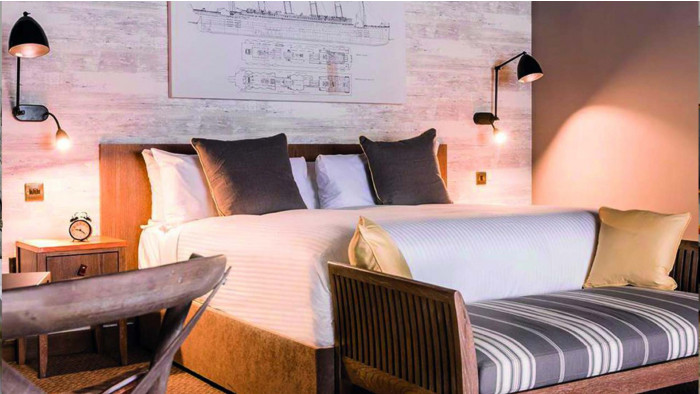 Rooms from £79
Book now at Booking.com

It may be a little way out of the centre but that does nothing to detract from the wow factor of this four-star hotel amid Liverpool’s Stanley Dock – itself part of a Unesco world heritage site overlooking the river Mersey. Making maximum use of the star quality of a 19th-century warehouse building, the rooms are HUGE (56sqm up to 76sqm) and feature high-end tech, free Wi-Fi and fancy toiletries. Underground, there’s even a wellness sanctuary with a hydrotherapy pool. 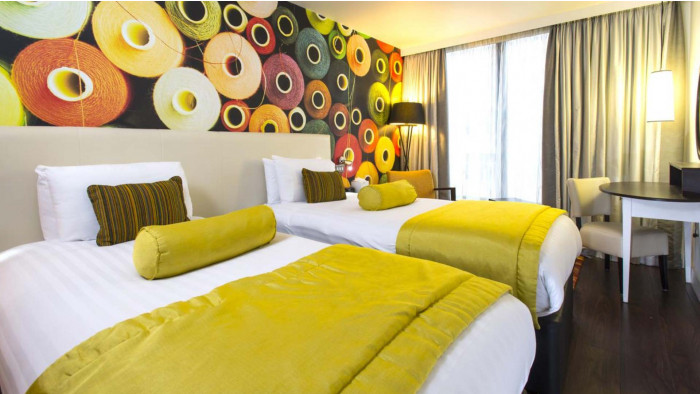 Rooms from £88
Book now a Booking.com

A bit industrial-chic, a bit swish, this boutique hotel – part of a chain that emphasises style and quirkiness over identikit properties – is close to the action of the Cavern Quarter, Liverpool ONE shopping area and waterfront. But also manages to stay quiet and reserved. There’s a funky lounge to hang out in, Marco Pierre White Steakhouse Bar and Grill to graze at and a 24-hour gym … to at least consider. 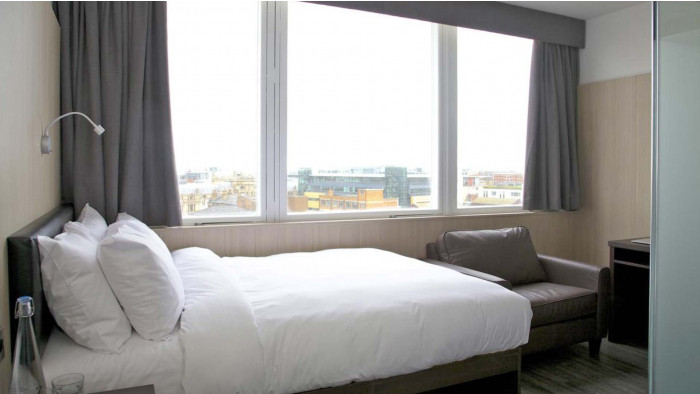 Rooms from £35
Book now at Booking.com

If you’re looking for a compact room on a budget, this centrally located hotel is a must check out. Prices for an Inside Double start from £35 – and while there’s no window (other rooms do have ‘em) who needs one if you’re out soaking up the city? The rooms aren’t spartan though, featuring underbed storage, en suite shower and a TV with Sky Sports and movie channels. 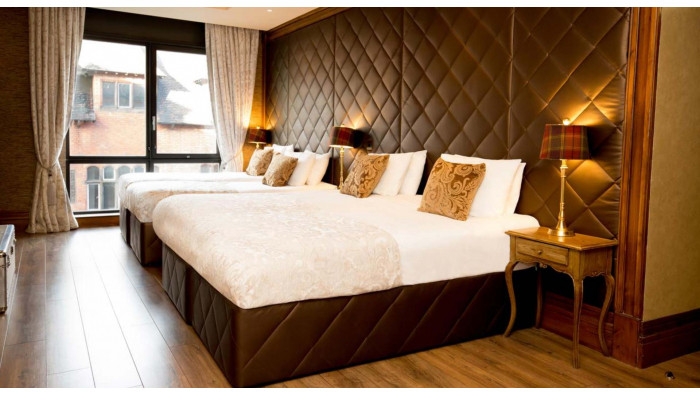 Rooms from £72
Book now at Booking.com

Liverpool is as synonymous with football as it is with music, so it’s not a surprise to find a hotel devoted to its most successful (so far) manager: Bill Shankly. Memorabilia dominates the decor in this imposing former council building but also think big, because when it comes to the rooms … these are not bijou spaces. Each one has a double Whirlpool bath, 50in TV and free Wi-Fi, too. 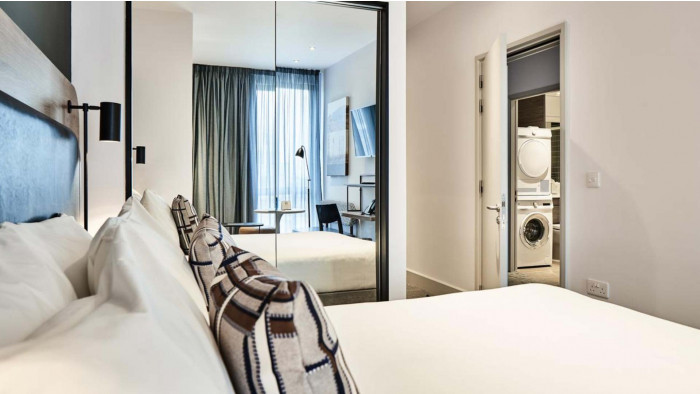 Rooms from £95
Book now at Booking.com

Another new addition to the Liverpool scene, Quest opened in September 2019 and offers 100 serviced apartments (studios, one-bed, two-bed) that have separate living, dining and sleeping areas, as well as smart TVs, work stations and kitchens. There’s also a gym. You can’t quibble about the location: it’s a two-minute walk to Liverpool Central station and right on the doorstep of Bold Street for food, drink and entertainment.